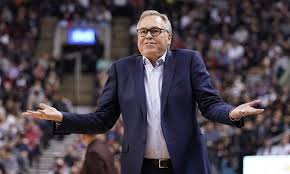 In addition, Amar’e Stoudemire and the highly-rated Ime Udoka will join D’Antoni at the New York franchise.

It is a mouth-watering supporting cast to new head coach Nash, who has time and time again doubled down on his ability to manage players and personalities.

These new hires seem to tick the X’s and O’s box – which should excite many basketball fans who are looking forward to seeing a healthy Kyrie Irving and Kevin Durant when the new season eventually does tip.

In a moment of beautiful serendipity, D’Antoni will now serve under Nash, after coaching him from 2004-08 in that enigmatic Phoenix Suns roster that birthed the ‘seven seconds or less’ style of offense.

D’Antoni brings considerable coaching success to the championship-contending Nets, and he has always been lauded as one of the most creative strategists in the association.

He coached the Rockets for the last four seasons to an outstanding 217-101 record and with it the longest active playoff streak in the league.

D’Antoni has received the coach of the year nod twice in his career.