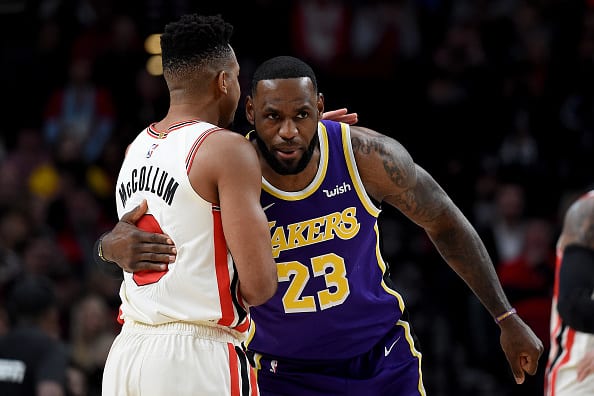 The rumors of the Los Angeles Lakers’ demise have been greatly exaggerated.

The Lakers are back in business and 2-1 up in their first-round series against the Portland Trail Blazers. With the Game 1 loss seemingly well and truly behind them, LA can make it 3-1 in Game 4, as per our Bet Hub predictions below 👇

Bet on the Game 4 of the Lakers v Trail Blazers with BetMGM. Every bet type, market and promo is now available ONLINE. New to BetMGM? Your first bet is risk-free up to $500! If you lose, get it back in bonuses!

It didn’t surprise anyone to see Portland claim an upset win against LA in Game 1, with some pundits predicting that they might even claim an unlikely sweep.

Since then, the Blazers we’ve come to know have been put back into their shells by a rampaging LA Lakers team who have been able to control the pace.

Our predictive model suggests Blazers’ head coach Terry Stotts can make the necessary adjustments to return to the sort of form that saw them shock LeBron James and co. in Game 1.

Portland already knows the recipe to beat the Lakers; keep Davis away from the post and force their role players in Caldwell-Pope and Green to beat them from the perimeter. It’s easier said than done, but the Trail Blazers have shown they’re capable of executing the plan.

While they’re not favored by the sportsbooks, or our predictive analytics model (28% probability), we still believe they are worth a play at the odds on offer as they are simply far too good for bettors not to have a small bet on Portland causing another upset.

The key to the Lakers’ success in this series so far is their ability to somewhat limit the Blazers on offense. In the five games prior to this series, Portland averaged 124 points per game. The only way they get back into this series to level it up is to return to that fast-paced offense. Take the Over here.

Portland no doubt took a morale hit losing the past two games after the highs they experienced in Game 1. Our model predicts this series still has a lot left in it. Look for the Blazers to get back on track and at least cover the spread. You can review the best legal online sportsbooks in your area, here.

Today’s preview brought to you by Dimers.com. Dimers’ predictions are based on 10,000 simulations of this particular matchup.