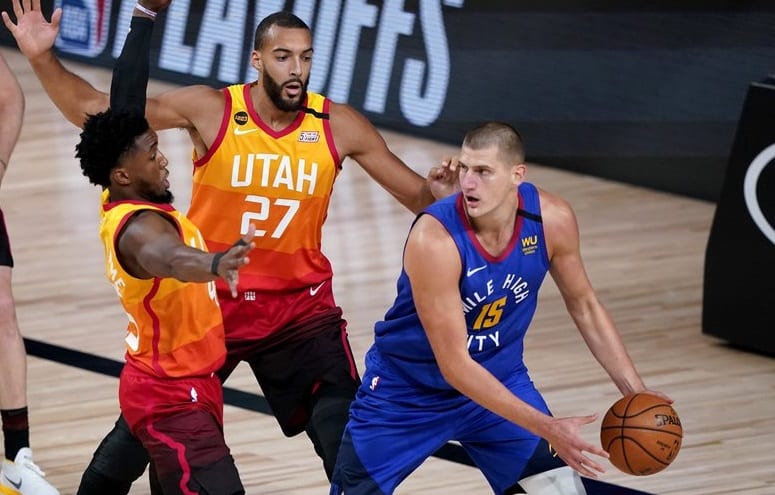 The Utah Jazz and Denver Nuggets meet in a Game 4 that promises to be series defining: if the Jazz can continue their momentum.

Third seed Denver wouldn’t have expected being down 2-1 in the first round of playoffs and clinging to survival, but that is exactly where they find themselves after an embarrassing 124-87 defeat to Utah on Friday.

Can Jokic and co. get back into the series?

Bet on the NBA Nuggets v Jazz game with BetMGM. Every bet, market and promo is now available ONLINE. New to BetMGM? Your first bet is risk-free up to $500! If you lose, get it back in bonuses! Join here.

At first glance, this appeared to be the two most even teams coming up against each other in the first round and that theory rang true after Game 1 which Denver won in overtime.

Since then, Utah has had their way with the Nuggets, but our model is expecting a return to the type of score line that eventuated in the first matchup. Look for it to remain tight and for Denver to cover.

A lot of people underestimated the Jazz, but Utah would not be surprised by how well they’ve played so far in this series. Behind a well-balanced team coached by one of the best minds in the league in Quin Synder, the Jazz are always dark horse threats.

Our predictive model sees the Jazz winning this game and getting an almost unassailable 3-1 lead.

Denver were unusually unproductive on offense in Game 3, scoring only 87 points. You don’t see the Nuggets scoring less than 100 points too often, in fact, the over won in the previous nine straight Denver games before that. Expect for that to get back to normal in Game 4. Bet the over.

Get up to 40% winnings boost with BetMGM when you opt-in and place 4-7 leg parlay on any combination of sports or event.

Such a crucial game in which a loss for Denver might mean an earlier than expected end to the season for the Nuggets. Look for them to keep it close in a free-flowing game.