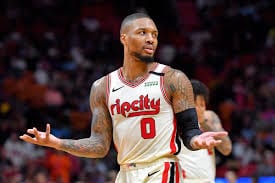 Damian Lillard and Paul George had a little back and forth on Social media after the Clippers win over the Blazers and it got personal.

George made a comment that the Blazers are getting sent home this year and Lillard responded with a clap back of his own.

Lillard and George have a history of bad blood.

Lillard then waved at OKC before he was mobbed by his teammates at midcourt.

This whole situation seems to be boiling from that moment and something neither player has forgotten.

“If anything, it should just tell you how much it hurt them to go through what I put them through in those situations previously,” Lillard said.

Lillard is doing everything he can to help keep the Blazers stay alive for a chance at the play-in game.

Portland’s All-Star has been putting up monster numbers in the bubble, but the Phoenix Suns have been playing strong as well, led by Devon Booker.

George responded to all the hype saying, “Competition, It’s part of the game. Simple as that. … Some people can play with talking, some people can’t.”

Both teams are off Sunday.