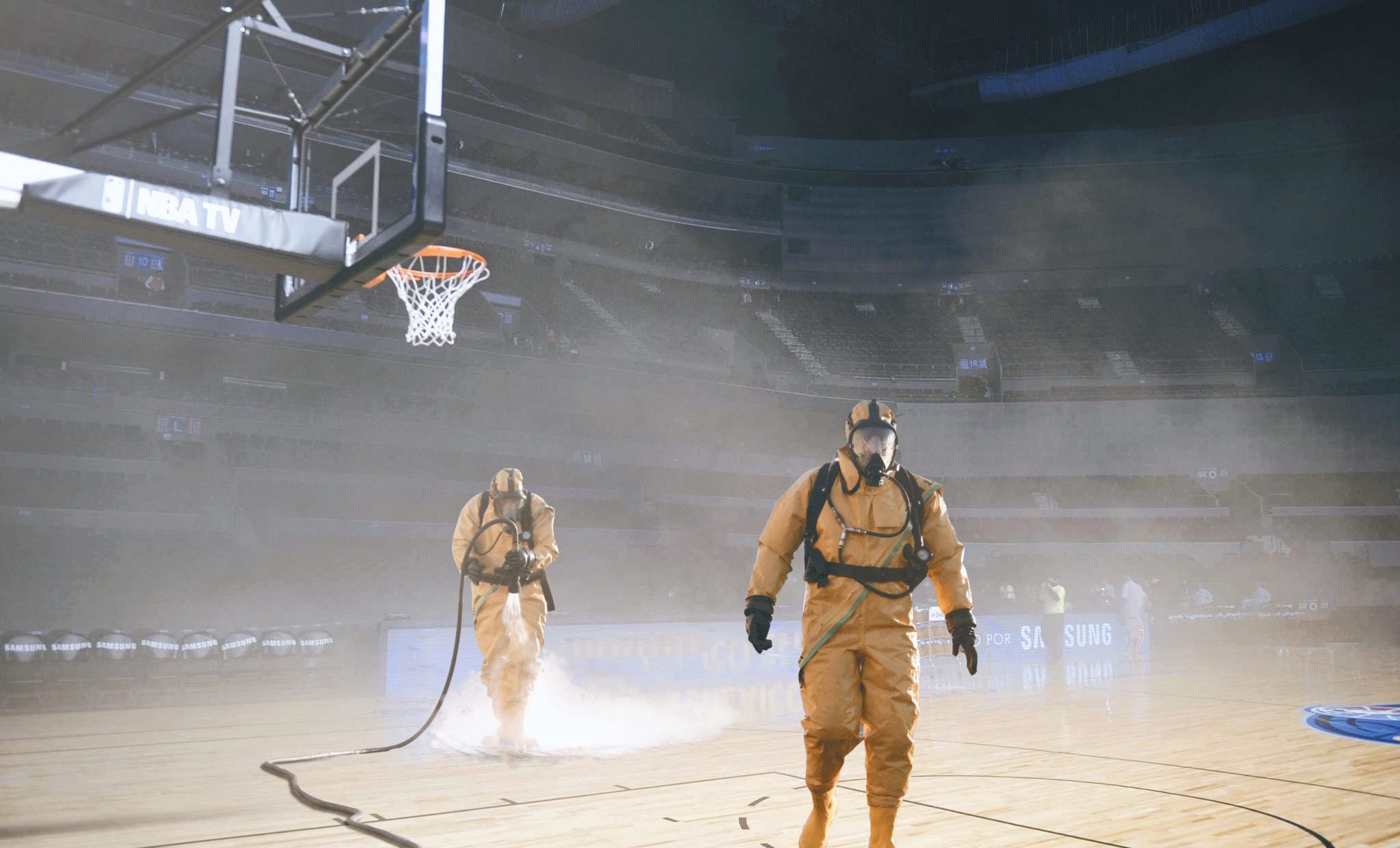 After waking up to yet another series of harrowing Italian coronavirus headlines, Marco Belinelli picked up the phone and called Danilo Gallinari and Nicolo Melli.

Desperate to see his family in Italy but unable to leave the house, let alone the country, Belinelli had begun to seek solace in his fellow NBA countrymen.

There was something uniquely comforting about talking to Gallinari and Melli, two men who also felt painfully helpless as they followed Italy’s rapidly worsening situation from half a world away.

Italy has more than 235,000 confirmed cases and over 34,000 deaths, the fourth-most worldwide despite the country having just 0.8 percent of the world’s population.

And as confronting as this pandemic has been for everyone, it’s been especially soul-crushing for Italians like Belinelli.

The Spurs guard knows he is one of the lucky ones, with his friends and family dodging the eye of the storm.

But his heart still breaks for every life lost.

“Being stuck in San Antonio has been hard,” Belinelli told Basketball Forever. “It was really hard knowing that Covid was taking more and more lives every day. I just felt hopeless.

“It’s been a real tragedy. Every morning my fiancé and I wake up and immediately check the Italian news… It’s clear that our health system was not ready to manage all this. All the news was like a horror story.”

For Belinelli, maintaining a positive outlook – even in the darkest of times – is the only way forward.

“I have never felt so proud to be Italian, because what I saw was a united country that fought and did not lose heart,” he said.

“And I have been able to stay close to my country by participating in social campaigns to spread the correct messages through my social networks and by supporting the hospital of my city, Bologna.”

Already doing everything he can from San Antonio, Belinelli has tried to distract himself with simple pleasures: spending time with his fiancé Martina and French bulldog Lemon, revisiting his childhood love of building elaborate Lego structures, and working out with the equipment the Spurs deposited at his house immediately after the season was suspended.

But he still finds it hard to believe that until recently, he hadn’t shot a basketball or stepped foot on a court in more than two months.

“I don’t think I’ve ever had that in my past,” Belinelli said. “During the summer I’m usually playing with the national team.

“It was tough. I was watching a lot of basketball on TV and YouTube instead, old games. I really missed it a lot. It was a very strange feeling.”

While Marco Belinelli was locked into the United States when the pandemic hit, many American players abroad were worried they’d be locked out.

Things were looking especially scary for the 40-odd American players plying their trade in China, according to veteran NBA agent Joel Bell.

“I had some players in China at the time and their teams wanted them to stay,” Bell told Basketball Forever.

“We were very concerned about what would happen if they were forced to stay, and whether or not the American government was going to let anyone in from China. We were preparing for the prospect of guys being stranded in China for who knows how long.”

Determined to minimise any potential problems when flying home, some players were flown back to the US via unusual and indirect routes.

“With two of my clients, Tywon Lawson and Dante Cunningham, we got them out through other countries,” Bell said. “I don’t want to say it was all cloak and dagger, we’re not James Bond here, but you were very concerned about the travel issues and the health issues.

“In some cases, we had guys going to Fiji and staying there for a couple of weeks. The virus wasn’t there and we had a lot more flexibility travelling from Fiji to the US than from China to the US.”

Adding to the stress for many players was the uncertainly surrounding the status of their contracts, some of which had clauses that could conceivably allow teams off the hook in the event of a pandemic.

Even when that wasn’t the case, there were teams that claimed they couldn’t afford to continue paying their players due to the looming economic fallout of the pandemic.

“I don’t want to call out any particular team or country,” Bell said. “But there was one player I had, a well-known player, and his team was in this country that’s notorious for contract issues.”

“They said ‘we’re not paying him, but if you want, we can give you an IOU for October’. Most other teams were pretty good, but with these guys, they didn’t even try to honour the contract… They were using the pandemic to get out of prior obligations.”

Another potential problem was the rulings that could’ve been handed down if a player’s contractual issues ever went to court.

“Sometimes courts can rule that this was an act of God and that would supersede what the contract actually said,” Bell said.  “That didn’t happen because nothing ever went to court.

“But what you had to be concerned about was that if it did go to court, it could be ruled an act of God type thing, in which case the player could very possibly lose the case, so you have to factor that into the position you’re taking.”

Not only did the coronavirus pandemic bring basketball leagues around the world to a screeching halt, it’s having a profound impact on the way teams’ key decision-makers are thinking about the future.

The flow-on effects of the virus extend well beyond games taking place in empty arenas.

Adelaide 36ers general manager Jeff Van Groningen, a championship-winning GM who famously brought Andrew Bogut to the Sydney Kings in 2018, says he has completely reshaped the way he approaches the recruiting process following the outbreak of the virus.

“One lesson I’m learning is the true value of recruiting certain types of people in these times,” Van Groningen said. “The value of the person, the strength of character, the resiliency that you start looking for because of the time period you’re in. You know, asking ‘is this the type of person you want around in uncertain times?’

“You’ve got an uncertain set of dates right now. You don’t know when you’re starting preseason, you haven’t yet had a full indicator of when the season will start. And you start to really value people who understand that and can manage that.”

Van Groningen believes that because many players have lived in such controlled and insulated environments for so long, a drastic global disaster like a pandemic is likely to really shake some of them.

“There’s just a lack of preparedness that some people might have if you’re living in a [professional athlete] bubble,” he said. “If you’ve been a basketball player or a coach who’s completely focused on that part of your life, perhaps you can be a little unaware of your surroundings, of what’s going on in the wider context”.

“In our industry, simply because of that singular focus, some athletes and coaches can be like that… And then there are others who you just know ‘yep, they’re really across this’.”

Another interesting space to watch will be the condition and skill level of players when games finally resume.

The 1999 NBA lockout particularly highlighted the dangers of extended hiatuses, with many players returning to the floor rusty and out of shape.

According to Van Groningen, next season will reveal a lot about which players habitually put in the work regardless of the adversity unfolding around them, and which players don’t.

“Those that are self-motivators, that work well within their own drive, their own space, I think will really utilize this time most effectively,” Van Groningen said.

“There may be some guys that are used to being in group settings and drawing their motivation from extraneous motivators, being pushed, being part of squads. Those guys have been going through some major adjustments.

“But I think those with that singular focus on their own craft and their own improvement, they would be in the gym now thinking ‘I’m going to shock a few people’. Meanwhile, I think there are others that are saying ‘when can I train with the team? I don’t know what to do here’.

“No one saw this (coronavirus) coming, and like any huge challenge, some take it on head-first, with abandon. For others it will be an adjustment for sure.”