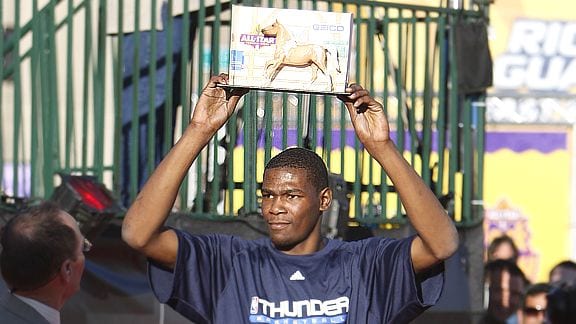 The NBA and ESPN are working to put together a televised H-O-R-S-E competition which will feature several high profile NBA Players, sources have told ESPN.

There have been ongoing discussions between members of the NBA, NBPA, and ESPN with the hope of holding a H-O-R-S-E tournament between several players who are currently isolated.

The players would use their own home gyms to compete shot for shot in the traditional playground game, sources said.

Details for this televised event, including a schedule and list of players competing, are still being finalized.

The tournament would be a welcome diversion for NBA fans who haven’t seen players compete since the league halted play March 11 due to the coronavirus (COVID-19) pandemic.

There is no expectation from league officials that play will be able to resume anytime soon.

Current NBA and local isolation protocols governing players make it impossible for players to compete in the same location.

The H-O-R-S-E competition would have a similar feel to the televised NBA 2k20 video game tournament that ESPN aired on Friday pitting players against one another via online gameplay.

There are still plenty of variables that need to be worked out before fans could possibly see LeBron and Steph square off in the ultimate game of H-O-R-S-E, but it could happen. Keep your fingers crossed.