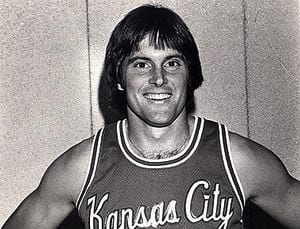 Long before she became Caitlyn, or shared the small screen with the Kardashian clan, Bruce Jenner flirted with a shot at the bigtime in the NBA.

Known as the “World’s Greatest Athlete” after setting several world records and winning the gold in the decathlon at the 1976 Olympics in Montreal, Jenner would add a new title to his resume: “King for a Day.”

The Kansas City (now Sacramento) Kings selected the Olympian with the 139th pick in the seventh round of the 1977 NBA Draft. Jenner, who was riding high off Olympic fame, would be presented with a jersey bearing the number 8,618: his decathlon score.

He signed autographs for staff and was a big hit with the team, but never actually laced up his sneakers for a game.

The whole thing was a marketing stunt pulled by the lowly Kings who were fighting for attention and respect in a sports town they shared with the more successful Chiefs of the NFL.

They even planned to hold ‘Bruce Jenner Night’, sponsored by Wheaties, with everyone in attendance getting to see Jenner and receive a mini box of the cereal.

After finishing the season with a 40-42 record, the Kings decided to one-up the Chiefs who claimed to always select the best athlete with their draft choice.

Though the 6’1” Jenner hadn’t played basketball since high school, he was at the peak of his athletic career and considered an American icon.

So one night in June 1977, he became an NBA draftee, and the Kings – not the Chiefs – got to lay claim to not only drafting the best athlete, but one of the biggest names in America.

Jenner would never take the floor with the team, but he did hit the court several years later with the Village People in Can’t Stop The Music, a 1980s musical comedy.