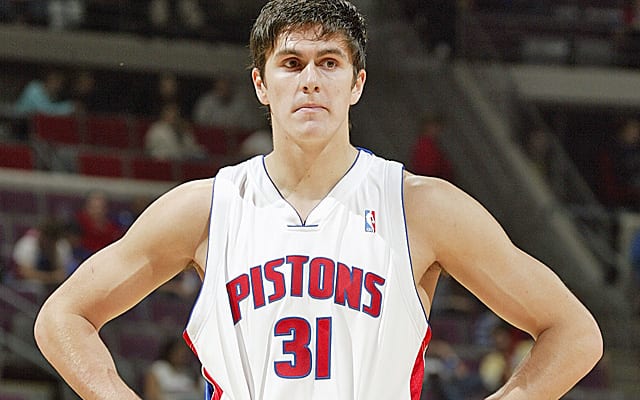 There was a time when Darko Milicic was projected to be the next big thing.

After all, this is the guy who was drafted one pick behind LeBron James and ahead of Dwyane Wade and Carmelo Anthony.

He never lived up to the hype, eventually leaving the NBA in 2012 with career averages of six points and four rebounds per game.

Darko’s “bust” reputation made him the butt of all jokes, and they continue to this day.

Even as recently as this past Saturday, Melo claimed to not remember who Milicic was when Wade mentioned his name in a recent Instagram Live video, prompting Milicic to issue the following response:

“I hope you’re mature enough to understand that life is full of rises and falls. Advice to them, because I think of them as more or less the good guys, is to not judge and mock when, thank God you didn’t go through the path that I went through. To them I wish all the best as always and I salute their careers, all the best in further life and lots of success and less judgements.”

Anyway, back to Milicic’s story…

After hanging up his sneakers, Darko had a few different ventures.

He only competed in one fight and lost in the second round.

In 2015, he made his first attempt at returning to the court, signing up play in the ABA league in Serbia.

But he later changed his mind and never played a single game.

Milicic then became known as a farmer in his native Serbia, an area in which he really thrived.

Fast forward to October, 2019, and Milicic made his return to basketball, playing in a fourth division game in Serbia.

He scored two points before exiting the game with a shoulder injury.

He made quite a few good passes, but clearly looked out of basketball shape.

Milicic didn’t have the career he would’ve liked, but he says he is happy and content with his life away from the court, having established a good life with his wife and three kids.