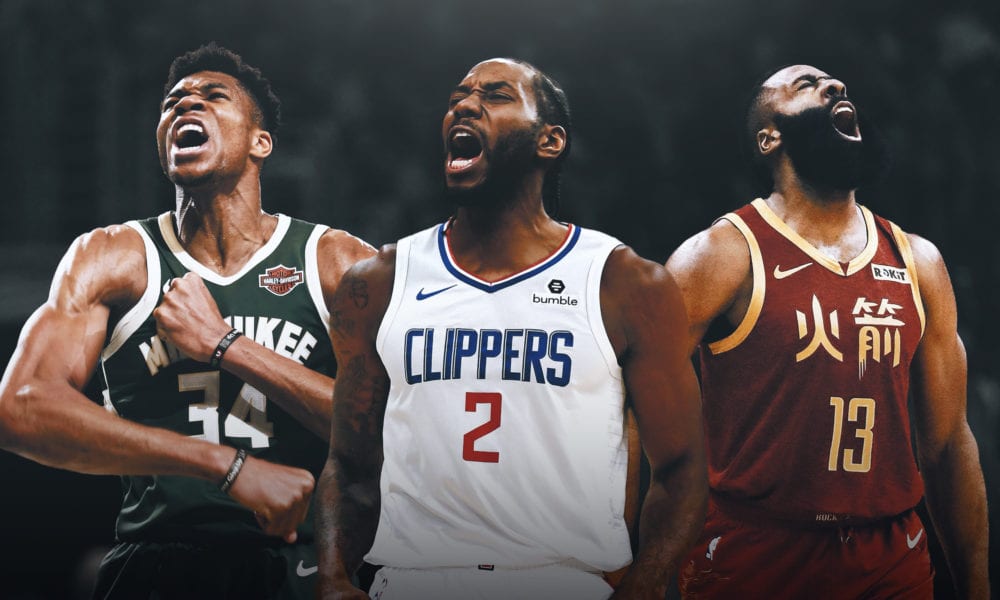 The new season has arrived, and before we get any deeper into it, we’re here to rank the league’s best players.

Once we’re through, feel free to leave your own rankings/abuse in the comments (like I need to tell you to do that).

Lillard has rarely been labelled a defensive ace, but he’s as savage on the court as he is behind the mic.

The Thunder learnt that the hard way.

Expect Lillard to play with more fire than ever this year after eventually flaming out in the playoffs with 37 percent field goal shooting in a sweep at the hands of the Warriors.

If you hacked into our website and moved George up a spot, I might find it hard to complain too much (other than about the blatant security concerns).

While I ultimately couldn’t bring myself to rank PG any higher than ninth, he was absolutely exceptional last year and finished third in MVP voting.

George averaged career-highs across the board, putting up 28 points (second), 8.2 rebounds, 4.1 assists and 2.2 steals (first), and was named to the NBA All-Defensive First Team.

Embiid, a man who to this day haunts Andre Drummond’s dreams, was an all-encompassing monster last year, significantly boosting his averages to 27.5 points and 13.6 rebounds.

Of course, the catch with Embiid has always been his health.

Since being drafted in 2014, he has played just 38 percent of all available regular season games (65 percent if you exclude the two lost years at the start of his career).

His talent, however, is off the charts.

Embiid finished last season fourth in points per game, second in rebounds, sixth in blocks, and second in free throws made.

He can turn the game on its head at either end of the floor.

And somehow, he has only been in the league for three years, with so much improvement still to come.

Jokic’s passing wizardry is so absurdly good that it can unravel even the best defences in an instant.

Much like the psychics you see all over cable TV, Jokic sees things the rest of us cannot.

And unlike those psychics, this towering Serbian baller is for real.

Last season Jokic averaged a lazy 20 and 10 while also finishing in the top 10 in assist percentage.

Davis’ earth-shattering impact extends to both ends of the floor, something which helped him edge past Jokic in these rankings.

He is in the absolute prime of his life, has looked especially dangerous in the early going this year, and is clearly ready to unleash fresh hell upon the rest of the league.

The main criticism of Davis at this point in his career is his lack of postseason success.

AD has made the playoffs just twice in seven years, losing in the first and second rounds respectively.

It’s not as though various combinations of Jrue Holiday, DeMarcus Cousins, Julius Randle and Nikola Mirotic were bad company over the past couple of seasons.

If Giannis Antetokounmpo can take Khris Middleton, Eric Bledsoe, Brook Lopez and Malcolm Brogdon to the first seed in the East, it’s fair to expect Davis to do more with what he had.

Now, he has his best chance yet to prove he’s a winner.

Curry is the only player in history whose shooting percentages seem almost unaffected by extreme volume and distance.

That should be a lethal combination for any shooter, and yet Curry gleefully drinks from the poison chalice.

Here’s a perfect example which really paints the picture: midway through last season, he was shooting almost 54 percent on threes between 30 and 35 feet, despite the rest of the NBA making just 35 percent of threes overall (via Kirk Goldsberry).

That just shouldn’t be possible.

Curry is an offensive weapon unlike anything we’ve ever seen, and without much help currently surrounding him, expect him to reassume his MVP mentality and make a push up this list.

You may well be freaking out about LeBron’s ranking, but just know there is very little separating players one through four on this list.

One of Giannis/Kawhi/Harden/LeBron had to fall out of the top three and it just had to be the guy coming off the worst season of his otherwise spectacular career.

LeBron may well rise up these rankings with an emphatic bounce back season, but he’ll have to earn it.

These rankings aren’t about rewarding lifetime achievements, they represent what these plays have done lately and how good they are right now.

Harden gets the nod over James primarily because he’s coming off his most spectacular season ever, as opposed to his worst.

Beard is in his prime, Bron is not… this isn’t as sacrilegious as Lakers fans might think.

As for why Harden isn’t ranked higher… well, he isn’t moving above Kawhi and Giannis until he at least plays half the defence they do.

It’s been said a million times, but defence (something LeBron completely let slide last season too) is half of the game.

An outrageously gifted, almighty colossus of a man, Antetokounmpo is a real-life Monstar.

The Greek Freak went to yet another level last season, putting up career-highs in points (27.7), rebounds (12.5) and assists (5.9), while also dominating at the other end of the court.

All he has left to prove now (other than the ability to hit threes consistently) is that he can overcome the very best defences in the postseason, especially after the Raptors gave him plenty to think about in the Eastern Conference finals last season.

No defender incites more terror than Leonard, a man who effortlessly ransacks the best offensive players in the business on a nightly basis.

And few players are more deadly with the ball in high pressure situations.

Other than missing out on the joys of love, laughter and human connection, being an actual robot has worked out incredibly well for Leonard.

Antetokounmpo was the MVP of the regular season just gone, but Leonard was the most dominant force when the postseason arrived.