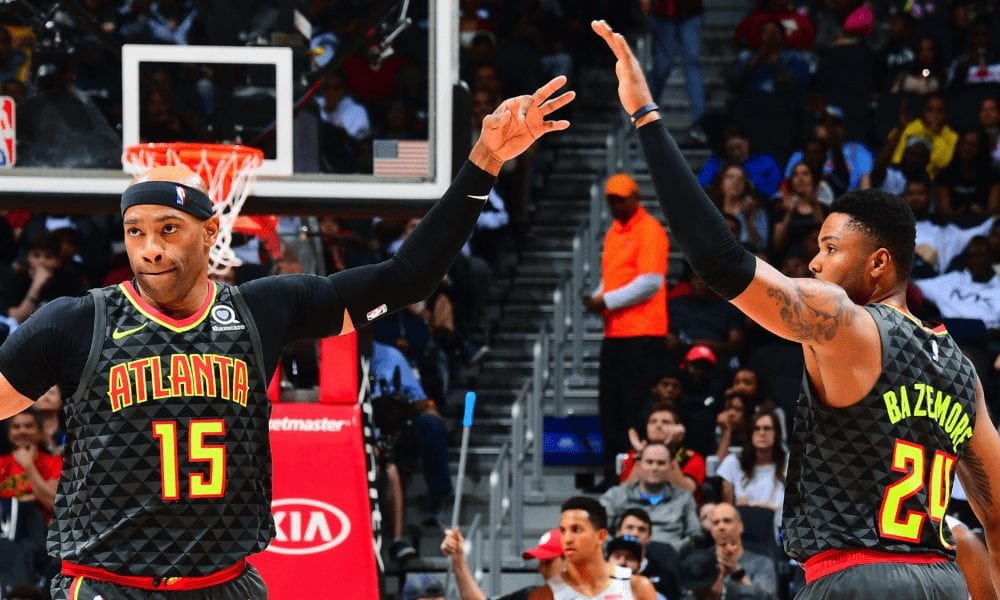 Everyone was drinking wine, talking shit, and LeBron was there.

Even before James had a few sips of vino, he was clearly looser than he’d been during any interview in years.

There’s a unique chemistry that comes with players’ only podcasts.

Nothing is forced or formulaic.

It’s just buddies who spend all their time together, talking about whatever the hell they want, with no filter at all.

There was something borderline magical about that show.

It felt like you were eavesdropping on the Cavs’ locker room or team plane.

Better still, Jefferson and Frye were (and are) genuine long-time friends, and it showed.

Their chemistry rubbed off on all their guests.

But when Jefferson was traded to Atlanta in October 2017, everything changed.

He and Frye did their best to keep the show going but its days were clearly numbered, and now they no longer feature on it.

Now the same thing is happening to Winging It, Vince Carter and Kent Bazemore’s show.

Those guys have similar chemistry and the show has rapidly gained popularity as a result.

But today, Bazemore was traded to Portland in exchange for Evan Turner, leaving the podcast’s future in flux.

And that’s the problem with these shows, you never know when the hosts will be forced to go their separate ways.

It could happen at any moment.

However, there’s also a strange beauty in that.

Sometimes acknowledging that something is temporary, and could be taken away at any moment, at least makes you appreciate what you have before it’s gone.

The Blazers have traded Evan Turner to the Hawks in exchange for Kent Bazemore.

Kevin Durant and Kyrie Irving have reportedly met to discuss teaming up.

The NBA has fined the Knicks $50,000 for their highly undemocratic ban of the The New York Daily News during their post-draft press conference on Friday.

Andre Iguodala is the bearer of bad news for Knicks fans.

The Pistons are planning to demolish the Palace of Auburn Hills.

Stephon Marbury, or ‘God’ as he’s known in China, has been hired to coach the Beijing Royal Fighters.