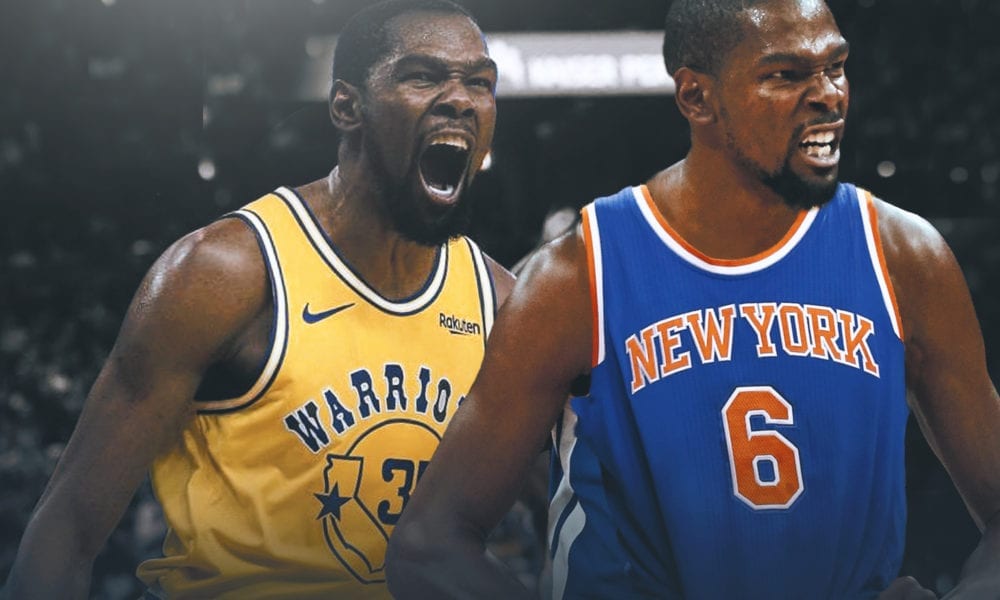 Everyone wants to see Kevin Durant leave the Warriors for the sake of league parity.

But everyone will get so much more out of his departure than that.

Why the Warriors win

The problem with teams that dominate for years on end is they inevitably lose their edge.

People are wired to pursue new challenges, not repeat them.

But if Durant leaves, they’ll have their new challenge: proving they can still win big without him.

Of course, they’re in that position a little earlier than we expected with KD currently sidelined.

But just look at what happened the moment a shred of doubt was cast on the Warriors’ continued greatness.

Steph Curry, Klay Thompson and Draymond Green immediately doused the Blazers in kerosene and set them on fire.

Added motivation aside, the Warriors look even more deadly with everything flowing through Curry again, while Thompson is no longer relegated to third fiddle and Green is fully energised.

The best part is they get to go back to being the Warriors team everyone fell in love with.

The OG Warriors are just objectively more fun, not just for the fans, but also for the Warriors themselves.

You might think the Warriors taking it to another level without Durant sucks for Durant himself.

And sure, he’s certainly pretty salty about it himself.

I see a little exaggeration there buddy, my worst nightmare?? U sure that this is the worst that it can get???

But whether KD realises it or not, Golden State thriving in his absence also helps him.

He can now leave the Dubs guilt-free and criticism-free, in part because he’s leaving them in a great place.

Warriors fans won’t resent him for pulling the pin, and at this point fans outside of the Bay Area will just be thankful he realised it was time to move on.

Then next season he’ll get the fulfilment that comes with his team living and dying by him, and him alone.

Carrying the Knicks (or even the Clippers) to a championship would provide him with more satisfaction than three titles in Golden State.

And most importantly for KD, it would change his public perception dramatically.

In terms of popularity, it would be like going from ‘The Decision’ LeBron to ‘I just won a championship for Cleveland’ LeBron.

And clearly nothing’s more important to KD than being liked again.

Why the NBA wins

Can you imagine the kind of money the NBA would make with KD playing in New York and making the Knicks relevant again?

Thanks to sheer market size, the Knicks are a goldmine even when they’re terrible, let alone when they’re good and everyone is tuning in and buying jerseys.

On top of additional cash flow, Durant leaving the Warriors maximises not only his star power, but Steph Curry’s as well.

Instead of sharing the floor with each other and having to play ‘your turn my turn’ basketball, both guys can go back to being the clear-cut number one guy, and nothing could be better for the league.

This can’t happen soon enough, and the NBA knows it.