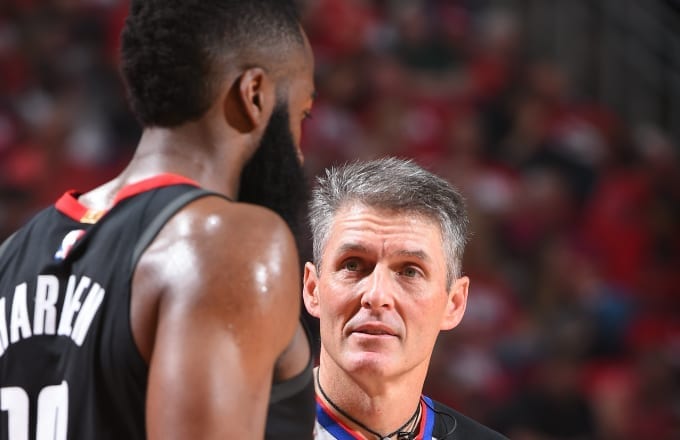 James Harden must have choked on his cornflakes when he read that Scott Foster had been assigned to officiate Game 2 between the Rockets and the Warriors.

Harden and the Rockets have a long history with Foster, one that is worth recapping.

Whenever Foster is around, bad things seem to happen to Houston.

This can’t always be his fault, but Harden and company are clearly convinced it isn’t a coincidence.

Over the past three postseasons the Rockets are 0-6 in games refereed by Foster and 21-7 in non-Foster games.

Of the four games Harden fouled out of, Foster called three of them.

This whole thing came to a head in February when the Rockets lost to the Lakers following some questionable calls.

Harden was called for four offensive fouls, while Paul and Mike D’Antoni both copped technicals.

Harden felt so slighted that he publicly asked that Foster no longer officiate Houston games.

“For sure, it’s personal,” he said at the time. “For sure. I don’t think he should be able to officiate our games anymore, honestly. Scott Foster man, I never really talk about officiating, but just rude and arrogant. I mean, you aren’t able to talk to him throughout the game… It’s pretty frustrating. You can’t have a conversation. You get a tech.”

Unfortunately for Harden, the only thing his comments achieved was a $25,000 fine.

And this whole shitstorm could very well repeat itself tonight.