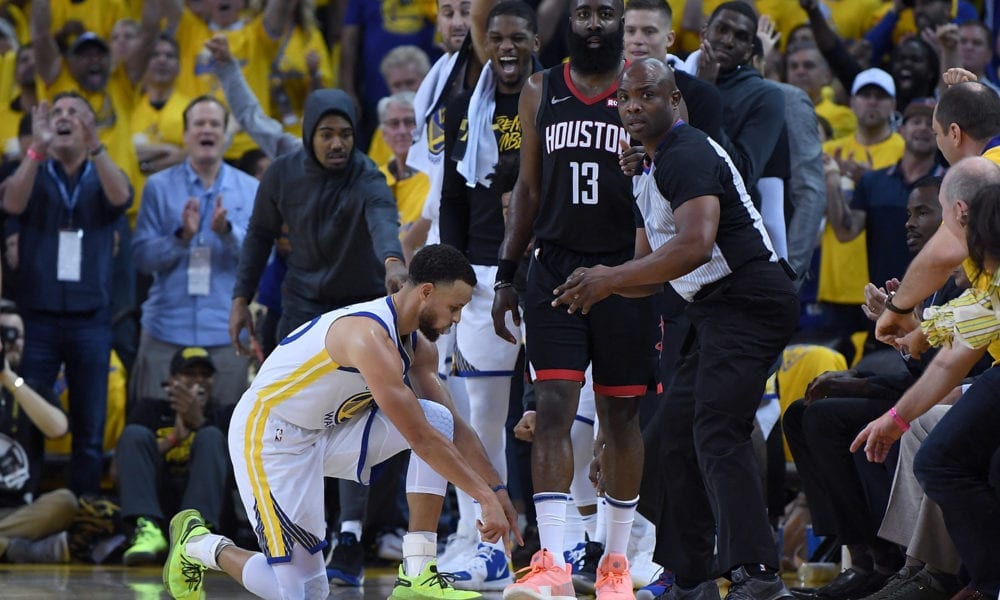 You may disagree, but I strongly believe close playoff losses are much harder to shake than blowouts.

And after coming agonisingly close to pinching Game 1 on the road against Golden State, I have a feeling the Rockets would agree.

Down three with 21 seconds remaining, Houston played it perfectly when Chris Paul and Danuel House Jr doubled Kevin Durant and stripped him, setting the stage for a game-tying James Harden three.

Harden danced on the perimeter in characteristic fashion before launching a three, violently kicking his legs out into Draymond Green, falling to the ground like a sack of potatoes, and missing the shot without getting the call.

Paul somehow came up with the offensive rebound and tried to get it to Eric Gordon, who quickly found himself out of bounds.

CP then barked at the refs like the human Chihuahua that he is and copped technical number two and an ejection for his efforts.

As quickly as everything turned around with that Paul-House double-team and steal, it all came tumbling down again.

So, did Harden deserve to get that call?

I don’t think so, but he certainly has in the past.

It would’ve felt like a massive bail-out call and if anything, Harden pushed off on Green before he took the shot.

None of it would’ve mattered if Gordon stayed inbounds and hit that shot (he was feeling it all night too).

That one really has to sting for the Rockets as they try to erase tonight’s painful finish from their minds and start fresh in Game 2 on Tuesday.

The Celtics stunned the Bucks 112-90 in Game 1 of their second-round matchup, the season-long underperformers toppling the league’s darling team. That was in large part thanks to Kyrie Irving doing Kyrie Irving things and Al Horford keeping Giannis relatively quiet.

Enes Kanter is hopeful of suiting up against Denver in the Western Conference semi-finals after suffering a separated left shoulder, but his status remains unconfirmed.

Tyronn Lue and Monty Williams have both made strong impressions on the Lakers as they interview for the head coaching job.

Everyone is talking about this old Jaylen Brown tweet.

A new video of Ben Simmons practicing threes has emerged and it isn’t pretty.

Even Chris Paul’s son made fun of the Rockets’ struggles earlier this season.