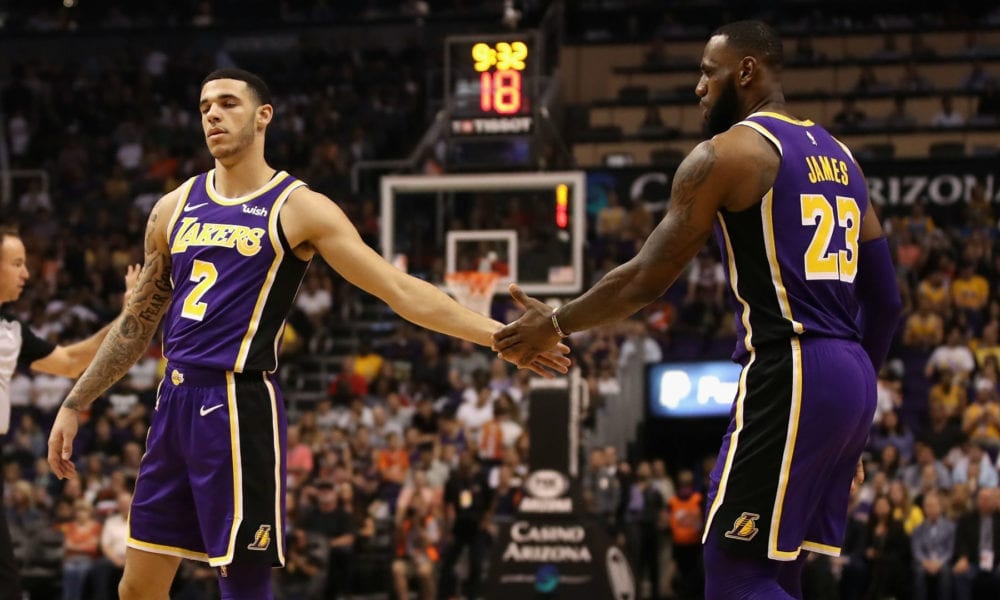 As the father-figure of the young Los Angeles Lakers squad, LeBron James is proud of Lonzo Ball.

Ball cut tied with Big Baller Brand c0-founder Alan Foster after around $1.5 million from Ball’s personal and business bank accounts was unaccounted for, per ESPN.

Ball believes that Foster, a friend of Lonzo’s father, “used his access to my business and personal finances to enrich himself.”

“As a result, I have decided to sever all ties with Alan, effective immediately.”

Ball later took to Instagram to hint that a possible move to Nike was on the cards.

LeBron James praised the way his teammate dealt with the situation in an interview with the Los Angeles Times.

“I love the fact that he’s taking control of his [stuff],” James said. “I mean, that’s what’s really, really dope to me.

“Once I saw this story I just seen a kid turning into a man.

“I’m more proud of him because I like the fact that he’s taking command of his stuff.”

James then compared Ball’s situation to things that he went through when he entered the NBA as a 19-year-old.

“That’s the toughest thing, especially when you’re young like Zo, like myself coming into the league,” James said.

“And you hope that you’re guided the right way. That’s all you can do.

Related Article:  Lonzo Ball To Miss at Least 6 Weeks Due to Knee Surgery

“That’s all you can hope for. When it’s not what you expect, it hurts. I know.”

Foster, who has a criminal past, has served as the business manager for all of the Ball family’s companies.

“This has been a very difficult decision as I had a great deal of love and respect for Alan,” Ball wrote in a statement to ESPN.

“But the time has come for me to take responsibility for my own career both on and off the court.”

Anyone who has seen the control that Lonzo’s father, Lavar, has over his life, will recognise that this is the best decision that he could have possibly made.