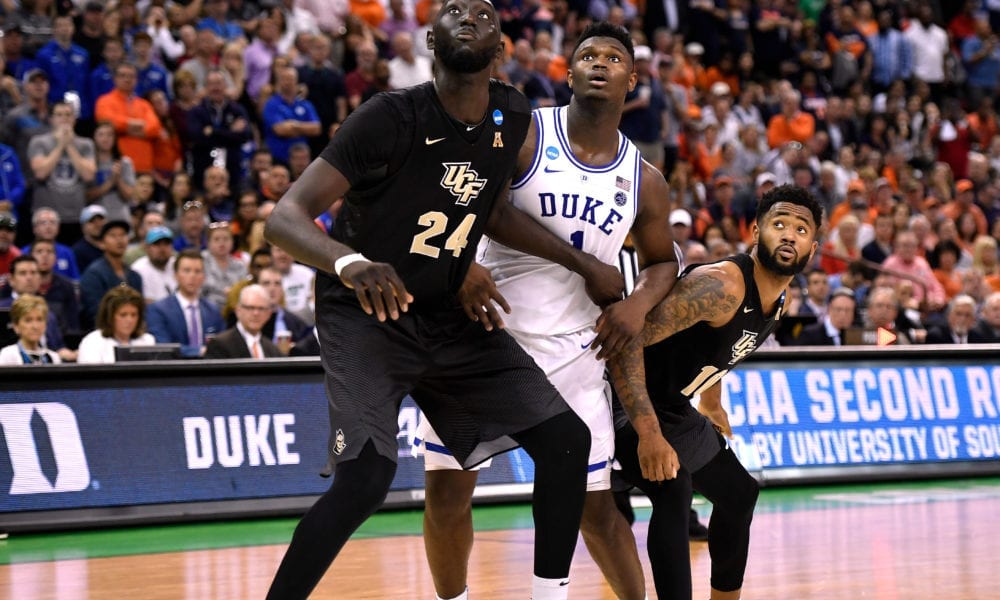 There’s so much action all at once that no one could reasonably be expected to keep track of it all.

With more than 150 hours of basketball crammed into 21 days – more than 7 hours a day on average – you probably just want a rundown of all the best bits at this point.

So let’s get stuck in.

Duke gets out of jail in a thriller against UCF

This was very nearly one of the most dramatic upsets in recent tournament history.

The overwhelming national favourite with three elite NBA prospects very nearly blew it against a much less powerful program with zero NBA prospects and just two players drafted in its 50-year history.

UCF were exceptional and looked every bit like stunning Duke – and the world – late in the piece.

But ultimately, one team had Zion Williamson, and one didn’t.

The projected number one pick – who finished with 32 points, 11 rebounds and four assists – made the most clutch play of the game with this and-one bucket over 7’6 behemoth Tacko Fall.

UCF played the game of their lives only to have their hopes crushed at the very last minute.

March Madness really is the cruellest of mistresses.

At any given moment, Zion Williamson might do something that melts your brain.

Take exhibit A, B and C:

Ja Morant going all out

Morant might’ve only lasted two games, but in that time he dropped a triple-double, threw down a ‘shut down the gym’ level dunk, hit five straight triples to start a game and drew various Magic Johnson comparisons.

In a 83-64 win over Marquette, Morant scored 17 points while pulling down 11 rebounds and whipping 16 assists around the floor.

He then took it right to Florida State, hitting his first five threes and finishing with 28 points, five rebounds and four assists.

But it was Ja Morant at his finest.

Second-seeded Tennessee was meant to cruise to victory against tenth-seeded Iowa in their round of 32 matchup on the weekend.

They looked to be even more of a sure thing when they extended their lead to 25 late in the first half.

But as happens so delightfully often during the tournament, the script was torn up part way through the night and chaos took its place.

After taking a brutal early beating, Iowa’s determined collection of hoopers – every single one of which was apparently equipped with balls of steel – boldly marched towards what would have been one of the greatest comebacks we’ve ever seen.

The Hawkeyes pulled out all the stops, quite literally at times as they forced turnover after turnover.

Incredibly, they managed to force overtime, before running out of firepower in the extra period and falling short 83-77.

But the audacity just to believe they could pull that off, let alone coming close to actually doing it, should be enough on its own to endear this team to the masses.

Wild finish in LSU vs Maryland

With a grand total of zero first round games featuring game-winners or overtime, LSU vs Maryland provided one of the first tastes of genuine drama we’d all been craving.

LSU surrendered a 15-point lead after missing 14 of 16 shots during a horror second-half patch, setting the stage for a thriller in the process.

The Tigers and Terrapins exchanged huge shots down the stretch, culminating in LSU star Tremont Waters hitting a game-winner which doubled as the biggest shot of his life.

Now that was the kind of sweet chaos we’d all signed up for.