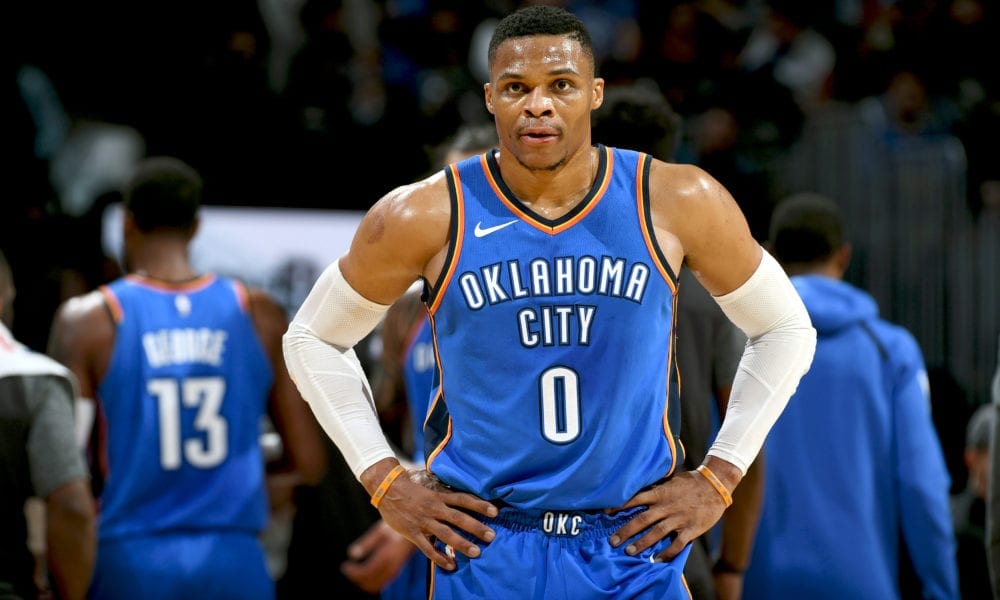 Russell Westbrook is the only player in the NBA that enjoys being the villain.

The All-Star guard was up to his old tricks during the Thunder’s 129-121 overtime win against the Portland Trail Blazers on Thursday.

Westbrook got into a tussle with Jusuf Nurkic in the second quarter after the Bosnian big man tripped him over.

Never one to let anything slide, Westbrook retaliated seconds later with a shove that earned him a flagrant foul.

Nurkic received a technical for his role in the dispute.

Portland diehards heckled and booed Westbrook for the rest of the contest in what became a game with plenty of feeling.

Westbrook claims that he doesn’t care about the boos from the opposition crowd, saying that he would probably do the same thing.

“It doesn’t matter to me,” Westbrook said, via ESPN’s Kevin Pelton.

“It doesn’t change anything. But I would boo me too, if I were on the other team.”

Westbrook’s not lying when he says that the boos don’t affect him – he ended the game with 37 points, 7 rebounds and 3 assists.

Emotions boiled over in the final seconds of regulation when Nurkic was ejected after getting a second technical for making forehead-to-forehead contact with Paul George.

“It’s my fault because I shouldn’t have put myself in that position,” Nurkic said. “Especially after the second hit from Paul Geroge.

“After the whistle, he hit me in the face and I should not have stepped back towards him. That cost us the game.”

Their latest win means that the Thunder have defeated the Blazers in each of their four meetings this season.

More evidence that the boos don’t work after all.