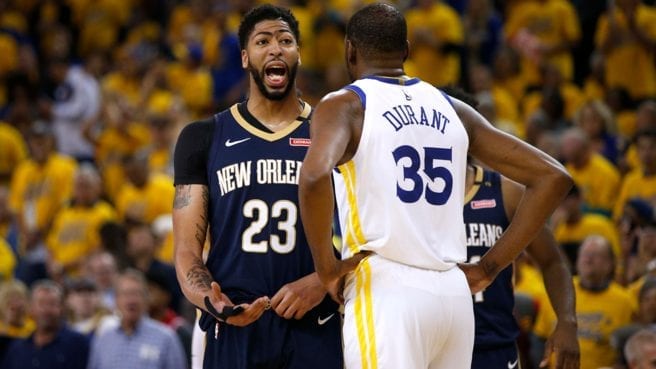 Unless you’ve been living under a Shaquille O’Neill-sized rock for the past 24 hours, you’ll know that Anthony Davis wants out of New Orleans.

Davis informed the New Orleans Pelicans that he won’t sign a contract with the team this summer and wants an immediate trade, per ESPN’s Adrian Wojnarowski.

AD apparently wants to compete for championships, with either Los Angeles or Boston the favourites to nab the 25-year-old All-Star.

Golden State Warriors superstar Kevin Durant chimed in on the situation with possibly the least surprising take of all-time.

“It’s definitely a topic of conversation,” Durant told ESPN’s Nick Friedell. “All NBA news is. I mean, it’s not that serious. So it’s like, why not talk about it?

So AD wanting to play basketball somewhere else, it’s not like the President shutting down government. It’s just basketball so of course we talk about it.

We all as players, we want guys to do exactly what they want to do in this league. We have a short amount of time, so why not do what you want?”

Big surprise that Kevin Durant is encouraging Davis to make the move – Durant’s well-documented move to Golden State has resulted in two titles, two Finals MVPs and a fancy house in San Francisco.

What makes Davis’ situation different from Durant’s is that New Orleans hasn’t been a true competitor in the Western Conference, and that doesn’t look like changing any time soon.

Despite the Pelicans’ lacklustre results, AD is already a six-time All-Star, three-time All-NBA first-team selection and is averaging a cool 29.3 points, 13.3 rebounds, 4.4 assists and 2.6 blocks per game.

Given Davis’ young age and once in a generation skillset, it’s safe to say that most teams in the NBA will be after his signature if he goes on the open market.

If the Pelicans wait until the off-season to trade Davis, they involve the Boston Celtics and their numerous assets.

But if they choose to deal him before the February 7th deadline, LeBron James’ Los Angeles Lakers will be the frontrunners.

Seeing that Davis is managed by Rich Paul – LeBron’s agent and closest friend – I know who my bets are on.