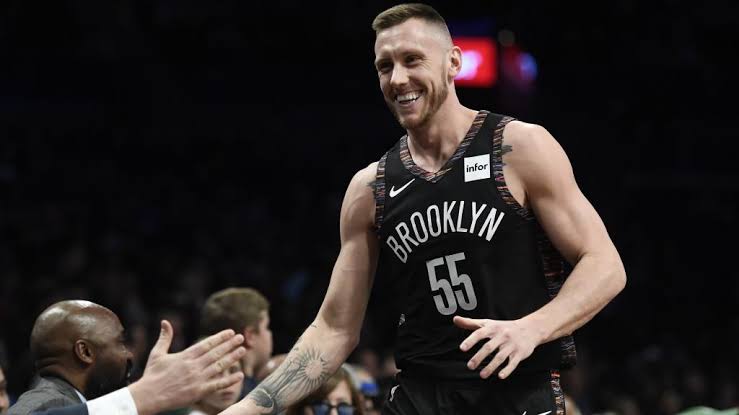 Mitch Creek was packing his bags for a west coast road trip with the G League’s Long Island Nets when he received the phone call he’d been waiting for his entire life.

It came late on Wednesday night and Brooklyn Nets assistant general manager Trajan Langdon was at the other end of the line.

After a few seconds of general chat, Langdon cut straight to the point.

He informed Creek the Nets were offering him a 10-day contract, and all the Horsham native could do was cry, his NBA dream finally realised after a lifetime spent honing his craft.

“A lot of people messaged me after it was shared online to say it made them cry.”

‪Sound 🔛🔊 for all of the feels.‬ ‪Let’s be honest, it's hard to find words when you get the phone call you’ve been waiting your whole life for. ‬ ‪This is the moment @brooklynnets GM Trajan Langdon told Mitch Creek he was about to realise his NBA dream.‬ ‪#NBLxNBA @mitchellcreek55 ‬

Creek was still in disbelief after hanging up the phone and even called his agent just to confirm it was all really happening.

Before putting pen to paper, Creek’s first instinct was to share the news with those close to him, everyone who had supported him along the way.

In his eyes, this breakthrough accomplishment was as much about them as it was about him.

“That phone call didn’t just change my life, it impacted everyone around me that supported me to get here,” Creek said.

Among the endless congratulatory messages Creek received were a couple from fellow Australian NBA players Matthew Dellavedova and Ryan Broekhoff.

“I’ve had hundreds and hundreds of messages today…it’s the first time in my life I haven’t had people tell me how shit I am, it’s been a nice change these past 24 hours, Creek said, tongue firmly planted in cheek.

“Hopefully one of these (contracts) turns into two then turns into three, but right now I don’t give a f–k, I’ve got nine days left of this contract.

“No one will ever take away the feeling that I feel right now.”

As the euphoria of his callup was replaced with nerves and game day preparations on Friday, it appeared Creek might not get the chance to hit the floor in his first game.

But that all changed when Nets forward Rondae Hollis-Jefferson banged heads with an opponent late in the game.

When Hollis-Jefferson was unable to shoot his free throws, Knicks coach David Fizdale was able to select a shooter from the Nets bench, and he chose Creek.

There it is. Mitch Creek makes his NBA debut and scores his first NBA points for the @BrooklynNets.

After missing the first he made the second, securing hisfirst ever NBA points.

“Scoring that first NBA point and knowing it was the opposition that picked me out to try and make it a tough one, that’s pretty cool,” Creek said.

“I was so damn nervous, so restless; I was everything you could think of.

“I missed that first one and my arms were shaking then when I went to take that second shot my legs started shaking too, I was like ‘oh my god.’

“I shot that second one and as soon as it went in I felt this calm feeling shoot through my body and it was a blissful moment where the whole crowd and everything went silent.”

Creek was welcomed back to the bench by his enthusiastic teammates clapping and cheering words of encouragement as the Nets secured the 109-99 win over their crosstown rivals.

With his first game out of the way, Creek’s next challenge begins: sticking around in the NBA.

Last month he signed a three-year contract with NBL expansion club South East Melbourne Phoenix, and as excited as he is about the prospect of playing in his home state for the competition’s newest team, his deal includesan NBA out clause.

Understandably, he hopes to get the chance to exercise it.

“The goal is to hopefully get this 10–day contract extended,” Creek said.

“The dream is to always play at this level.”

That being said, Creek is thrilled to have such a solid backup plan waiting for him in Melbourne.

“The NBA is my main focus without doubt, but with the endless support from South East Melbourne and their want for me to reach my full potential,” he said.

“I know if my journey takes me to them in the end, I know I’ll have a safe, successful place I can play, train and grow. So I’m truly in a win-win situation.”

Meanwhile, Creek’s agency has held talks with other NBA teams and the hope is that even if he doesn’t stick in Brooklyn long term, there will still be other interested parties around the league.

He knows he belongs in the NBA, he could sense it on Friday before he even checked into the game.

And he’s ready for his next handful of games.

“Right now I’ve got a big task ahead of me,” Creek said.

“I’ve been studying the [upcoming] teams and going over our plays.”

Creek feels the transition from Long Island to Brooklyn has been a smooth one.

“Getting those nerves out of the way, playing the way I know how to play,” he said.

“I know once I do that and become a little more comfortable.

“The way I talk and lead defensively, the 50-50 balls and things like that.

“Hopefully I can lift the level of the way the Nets are playing at the moment.

“If I can play five minutes a game and make an impact, that’s all I really want to do.”

Creek also wants to emulate the man whose injury paved the way for his first NBA points.

“Rondae [Hollis Jefferson] plays a similar position to me and I’ve been sent through film of him during the last 48 hours.

“How he’s getting scores and defensive stops and I watched him tonight closely again, they’re the kind of things I’m trying to strive towards.”

This hasn’t been an easy road for Creek.  What he has achieved has been as a result of perseverance, resilience, and hard work.

As he shot those free throws it felt like all of Australia was behind him, silently pushing him on from the other side of the world.

“It’s been a really hard few months mentally and physically, playing 6 games in 8 days and then the travel on top of that.

“I believed I could get there but I still always had that doubt.  I just wanted to try.

“A good coach and a good friend of mine, Bob MacKinnon from the last Summer League with the Mavericks, would say something and its stuck with me since…‘Lets just be a little bit better than yesterday.’

“And he would say it every single day.”

When you’re making major strides every single day, a 10-day contract might be all Creek needs to prove his worth.

Related Article:  Kyrie Hits Back At Reports of Beef with LeBron, Explains How Cavs Departure Really Went Down
-->