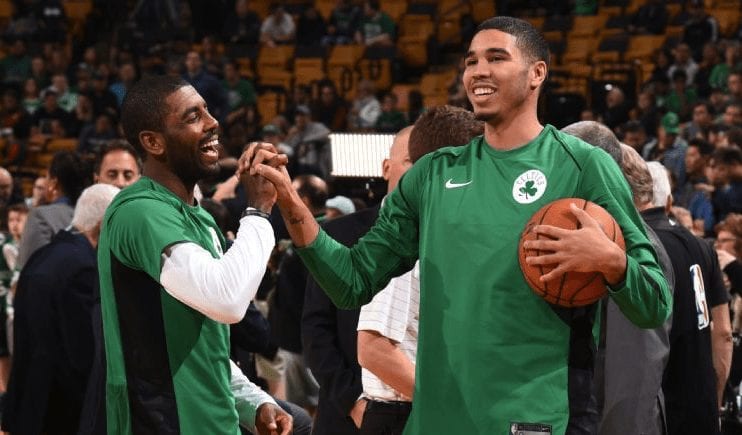 Kyrie Irving’s time with LeBron James in Cleveland didn’t just get him a ring, it left him with some important lessons about being a leader.

Irving’s leadership journey has been an ongoing process, and one that he works on everyday, whether it’s at practice or during games.

It’s working too, Kyrie’s new leadership skills have brought the Celtics from a 10-10 start to a six-game winning streak that’s still alive going into Wednesday’s game against Washington.

The secret to Irving’s evolution?

“It’s part of the next step of evolution for me in my career, of just learning what that means for me and what type of leader I want to be.”

And what kind of leader is that?

“Just really getting across being great and just being successful, without anybody feeling personal about you saying something honestly.”

“It’s all about communication.”

Kyrie revealed that he has reached out to players around the league to learn more about leadership and managing a team, but surprise surprise, didn’t reveal who.

While he wouldn’t say names, he did share what they’ve taught him.

“Patience. Patience. Patience,” Irving said. “At this point in my career it’s not necessarily about my skills or my talent, it’s more or less ‘how do I echo greatness to our group every single day?'”

Kyrie also admitted that concentrating solely on scoring is far easier than having to care about an entire group and lead them through the season.

At the moment Kyrie is doing both, averaging 21.8 points, 4.7 rebounds and 6.4 assists while leading his team through six straight wins.

His work isn’t going unnoticed by his teammates. Al Horford is one that has noticed the change in Kyrie.

“He’s really been there for us. He’s really taking guys under his wings, very vocal, encouraging when he needs to be. He’s really embracing that role.”

Just how far can Kyrie lead his Celtics team? Only time will tell.