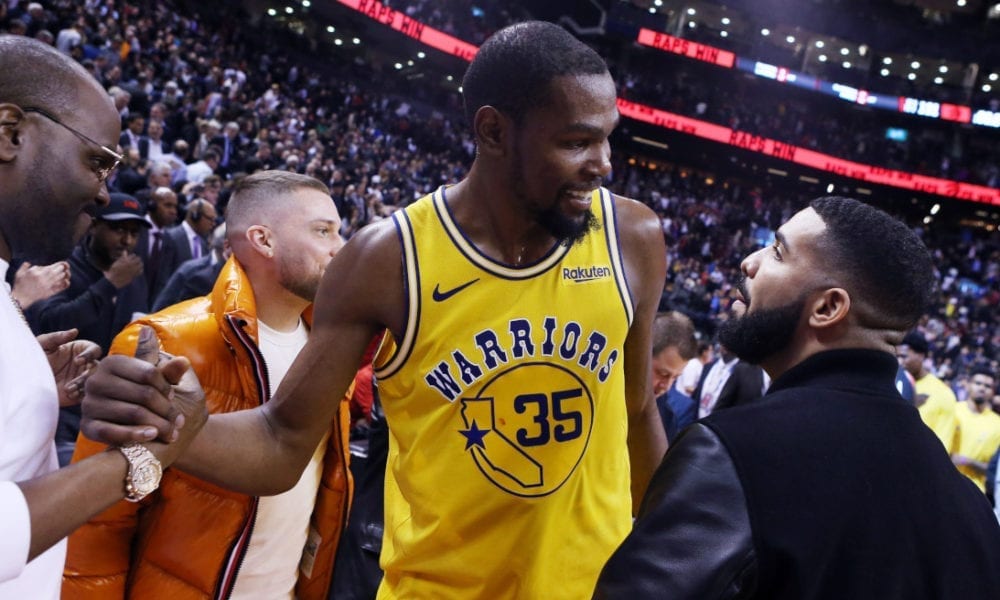 Kevin Durant’s monster 51 points, 11 rebounds and six assists wasn’t enough to get the Golden State Warriors the win over the Raptors, going down 128-131 on Thursday night.

It was a mixed night for Durant. He scored a career-high in points and hit a huge three-pointer late in regulation, but ending up losing both the game and his jersey.

The Slim Reaper didn’t give his jersey to a fan, or dedicate it to a charity – he donated it to sport’s biggest cheerleader, Drake.

While KD has made it clear in the past that he don’t give a damn ’bout no Drake night, the pair’s bromance was on display throughout the game.

During the walk back to the locker room at half time, Drake talked some smack and Durant hit him with a nipple cripple.

KD decided to amp things up in the third quarter, and made a few plays that left Drizzy in his feelings.

One impossibly deep three-pointer in the third quarter made Drake’s jaw drop like a hot new single.

When the final whistle blew it was all love, so when Drake asked for KD’s jersey, it was only natural that he said hell yeah, f*ckin’ right.

After the game Durant spoke to reporters about Drake’s presence at the game.

“He talks a lot of trash over there on that sideline, so any time I can throw it back in his face is definitely a win for me.”

It seems like Drizzy got the last laugh though. His team won and he took home a game-worn Kevin Durant jersey.

Maybe it was God’s plan, or maybe it just pays to be the NBA’s biggest fanboy.