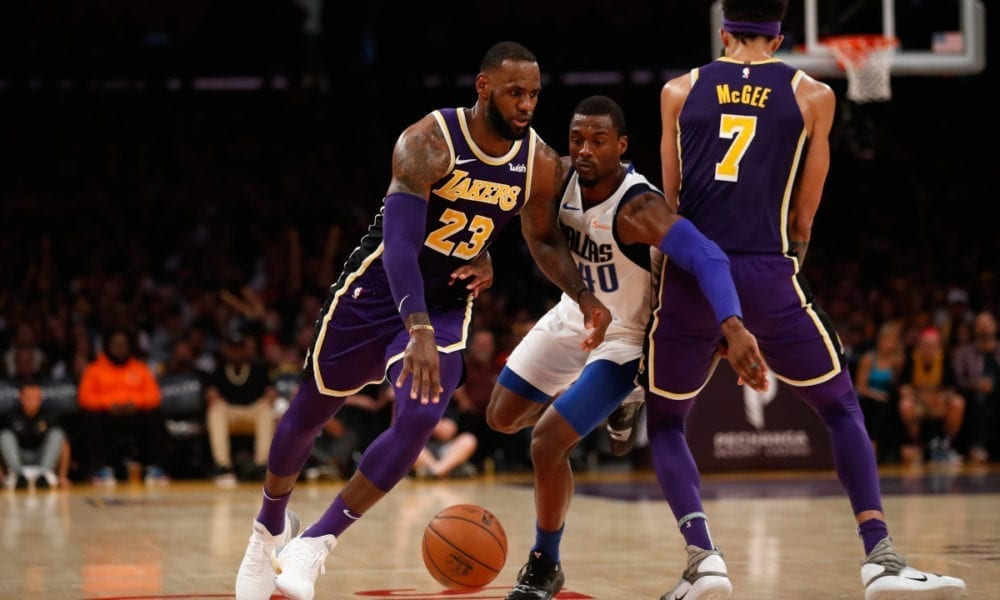 Just two seasons ago JaVale McGee was more known more for his lowlights than he was for his basketball prowess.

But JaVale’s Shaqtin’ days are over, and no one is happier about it than LeBron James, who lobbied the Lakers to add McGee to their roster this past summer.

“I played against him in the last two NBA Finals and I wanted him on this team because I know what he brings,” James told Tim Reynolds of the Associated Press.

“It’s his energy, his energy level, his ability at the rim and his ability to protect the rim. If you don’t have that on your team, you’re not going to have much, man.”

“You need to have people with a high IQ, which he’s got. That’s why I wanted JaVale to be part of this.”

Here LeBron is like the guy in romantic comedies who recognises that the nerdy girl is beautiful before she gets a makeover.

And McGee has shown his appreciation by putting in career-best performances.

The big fella is averaging 13.4 points, 6.6 rebounds and 2.6 blocks per game, rewarding the faith that LeBron and the Lakers showed him.

“He [LeBron] could have said get anybody,” McGee said.

“It’s just a reassuring feeling, a confidence builder I guess, knowing that you’re going into a situation wanted as an option, like you’re really wanted. That’s pretty dope.”

It’s a far cry from how JaVale felt during the 2013-14 and 2014-15 seasons, when he barely played due to stress fractures in his left leg and thought that his NBA career could be over.

“Of course, I had all those feelings, all those thoughts,” McGee said. “But what overshadowed all that was me just not being willing to prepare for the worst.”

“I’m just going to keep preparing for the best. So I just kept working like I wasn’t hurting, and it ended up being dealing with pain and the pain going away and then realising that the pain isn’t even there anymore.”

Now JaVale isn’t just happy with playing in the NBA, he wants to be an All-Star, average a double-double and lead the league in blocked shots.

He is also embracing his role as a leader in the young Lakers squad who can learn from his two championship runs with the Golden State Warriors.

“He’s vocal in the locker rooms and the huddles, he’s been producing for us, obviously his shot-blocking has been a big part of us having some success on defence. We’re very pleased with JaVale.”

JaVale’s career hasn’t had some miraculous turnaround, he has always had the talent, he’s just been waiting for an opportunity to show it.

The joke is on those who haven’t seen it until now.