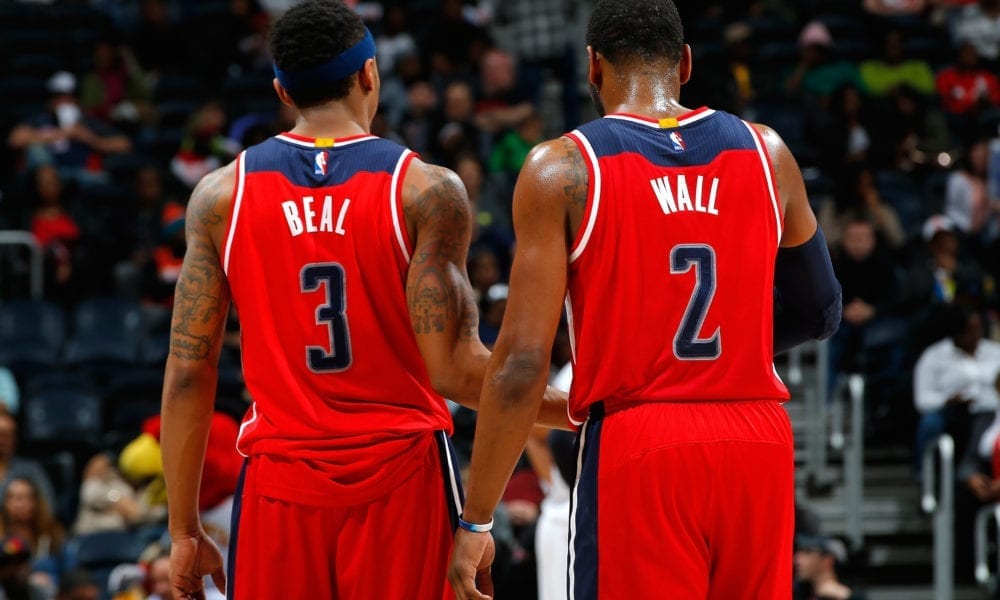 A series of verbal altercations broke out at Wizards practice in recent days, according to The Athletic’s Shams Charania and ESPN’s Adrian Wojnarowski.

John Wall cussed out Scott Brooks and got into it with Jeff Green, while Bradley Beal was engrossed in a heated argument with Austin Rivers, according to Wojnarowski and Charania respectively.

Beal then told team officials, “I’ve been dealing with this for seven years.”

It comes just hours after Wojnarowski’s report suggesting the turmoil-ridden Wizards are open to trading every player on their roster, including Beal and his fellow star guard John Wall.

Considering the Wizards kept both Wall and Beal out of trade conversations for Jimmy Butler and Kawhi Leonard, it’s a big turnaround for the franchise.

Washington would prefer to hold onto their two All-Stars, but players they have made available — Otto Porter and Kelly Oubre — haven’t fetched the interest required to add a third star.

Their new approach comes after back-to-back losses at home against Brooklyn and Portland over the weekend.

Wojnarowski’s report suggests the Wizards’ issues are far deeper than “enthusiasm” or “effort”, and that it comes down to poor performances, a lack of leadership from their veterans and nonexistent team chemistry.

That final point was certainly evident during the multiple shouting matches at practice.

And while it’s not uncommon for NBA players to trade verbal blows at practice, there’s clearly a deep seated level of discontent in Washington.

“The organisation has a job and they’re going to do whatever it takes to make sure that the organisation is going in the direction that they need to,” Beal told reporters on Monday.

“All we can do is continue to work hard every day, continue to put in work until something changes.

“I’m not going to stand here and say I’m mad, or frustrated, or angry about it.

“All I can do is control what I can control, and that’s totally out of my control.”

The Wizards, meanwhile, would do well to make a move quickly.

Because this whole thing seems to be getting worse by the day.