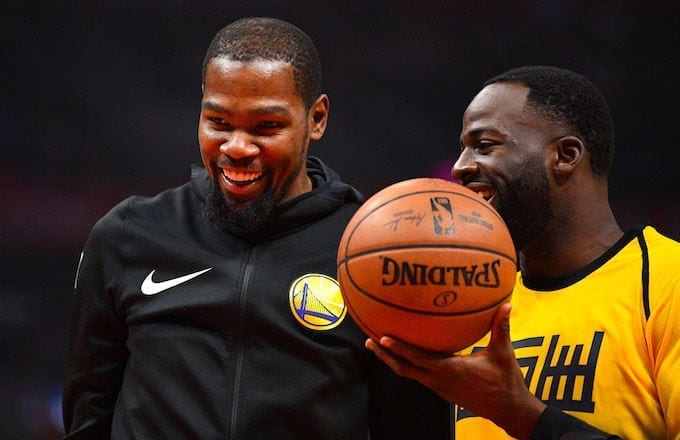 Amid intense media speculation that Draymond Green’s spat with Kevin Durant could fracture the Warriors’ dynasty, Green himself claimed it would only make team stronger during his first public address following the incident.

“What you must know is nobody in this organization, from a player — not myself, not Kevin [Durant], not anybody else — is going to beat us,” Green told reporters on Thursday, per ESPN’s Nick Friedell.

“Good luck with us now. We’re not going to crumble off of an argument. We are going to move forward.”

Green added that he’d accepted blame for his role in the heated clash, saying he was well aware of his intense nature and that it left him prone to getting burnt by his own fire.

“Kevin and I spoke,” he said. “We’re moving forward. I think there’s no secret that I am an emotional player. I wear my emotions on my sleeve. I play with that same emotion. Sometimes it gets the best of me and it doesn’t work to my favor.

“I am going to live with that. Because it works in my favor to the good, as my résumé speaks, and this team’s résumé speaks, more so than it doesn’t. So I am never going to change who I am.”

Green will return from his one-game suspension when the Warriors take on the Rockets at Toyota Center on Thursday night.

He and Durant walked into the arena together before shootaround and were “communicating positively”, according to Yahoo Sports’ Chris Haynes.