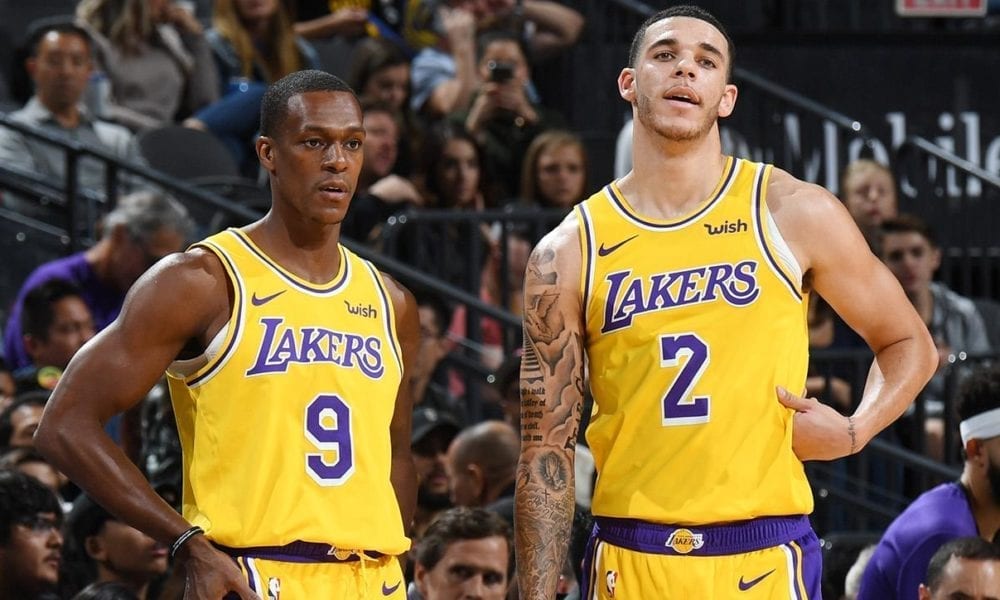 When Rajon Rondo returned from his three-game suspension on Saturday, he discovered his starting spot was no more.

Lonzo Ball had shifted into that role while Rondo was gone, and after averaging 12.7 points, 6.7 assists and 6.3 rebounds on 53 percent shooting across that three-game stretch, he retained it the night his temperamental teammate returned.

There’s been no word on whether Ball will hold onto the starting gig long-term, but Luke Walton should see that he does, and not just to prevent LaVar from having an aneurism or because Rondo is always half a chance to fight someone.

Ball’s case for starting begins at the defensive end, where he far eclipses Rondo.

Lonzo more than holds his own there and it also helps that, unlike Rondo, he actually tries in that department.

Rarely has the former Celtic put in any discernable effort at that end of the floor since leaving Boston, and he gets beaten constantly as a result.

Ball, meanwhile, was close to being one of the most affective defensive guards in the league last season, despite being a rookie.

Lonzo is also a more legitimate shooting threat, which in turn helps with spacing on a team which famously lacks elite shooting.

Yes, Rondo is shooting 50 percent from downtown across three games, while Lonzo is hitting at 40 percent across his six outings.

And yes, this is a small sample size.

But Rondo’s sample size is even smaller and is likely to regress much closer to his 33 percent rate from last season.

Lonzo’s improved marksmanship, however, can be attributed to a concerted offseason effort to refine his stroke, and is much more likely to be sustainable.

Not only is Ball a better shooter, defender and rebounder, but when you consider Rondo’s primary strengths – passing and smarts – Lonzo excels in those departments too.

If you’re still not convinced, consider this: the team’s best lineup to have played meaningful minutes features Ball at the point, not Rondo.

That five-man combination of Ball, Hart, Kuzma, James and McGee has outscored opponents by 10.5 points per 100 possessions.

The put that into context, there are only two teams in the NBA – the Warriors and the Bucks – with a better overall net rating.

In comparison, the best lineup featuring Rondo only has a 1.6 net rating.

The aforementioned Lonzo lineup also has a far superior assist percentage (59.6 as opposed to 46.4) and assist to turnover ratio (2.33 instead of 1.44).

But the real value in starting Ball and treating him like the team’s primary floor general is that he’s still super young and only getting better.

He’s a more-than-worthwhile investment, but there’s no guarantee Rondo will even be on the team next year, having switched squads every season since he left Boston.

Rondo is still a handy player; smarts and poise will always be valued in this league.

Not only is he the team’s answer for the future, he’s their answer right now.