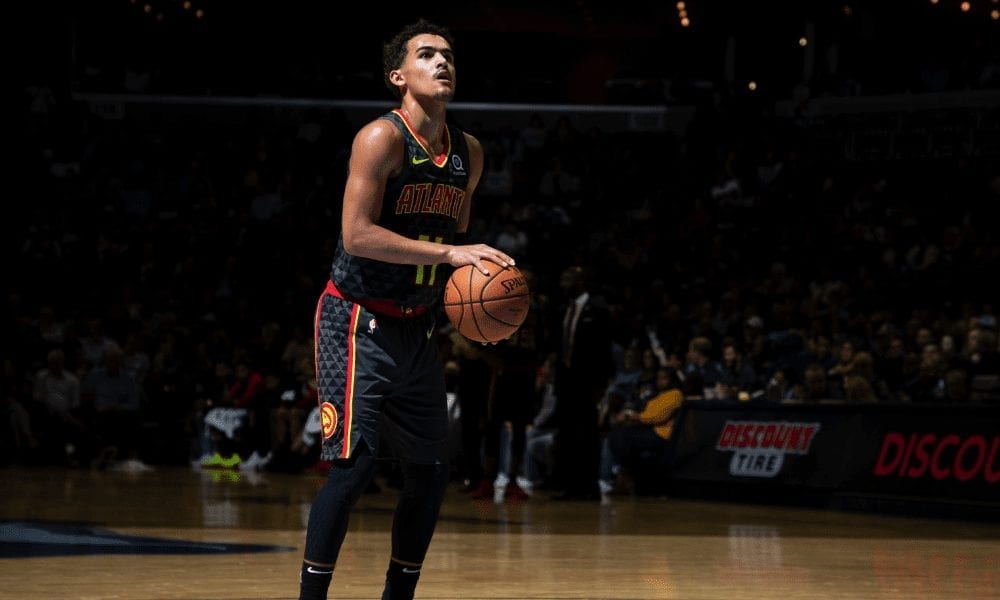 When Atlanta traded Luka Doncic for Trae Young on draft night, they were berated from all angles.

Many had soured on Young after his white hot start at Oklahoma was followed by a major drop-off, as well as numerous airball-littered Summer League showings.

Meanwhile, Doncic was absolutely primed for his NBA moment after dominating grown men all year in the world’s second-best league.

He was the surest ‘sure thing’ Europe had ever produced, while the enigmatic Young had gone from the sexiest prospect in college basketball to a massive gamble for prospective NBA GMs.

Fast forward to the present day, just four games into the season, and it appears Young will well and truly challenge Doncic – and DeAndre Ayton – for Rookie of the Year honours after all.

The former Sooner’s range is deeper than the Mariana Trench, and he’s already unleashed it on the league with great affect.

As well as effortlessly hitting shots from unreasonable distances, Young has successfully combined the mere threat of his shot with his tighter-than-ever handle to burn defenders and finish at the rim despite his glaring lack of strength and size.

That was on full display when he lit the Cavs up for 35 points and 11 assists last week, becoming only the eighth rookie in league history to put up those numbers.

The only rookies to do that over a full season were Allen Iverson and Oscar Robertson.

Of course, small sample sizes can be deceiving, as the Magic reminded us a year ago when they made a surprise 6-2 start to the season while averaging 114.8 points per game, before disappearing back into the hole of despair that they traditionally occupy.

Admittedly, Young’s sample size is slightly larger when you include the preseason, when he averaged 19.6 points and 7.1 assists in 32.2 minutes over five preseason games (and even launched a game winner from the mid court logo just to drive the point home).

It’s also important to acknowledge the calibre of teams Young has faced so far.

Rarely will the Knicks, Grizzlies and Mavs be confused with the league’s best, while the Cavs were among the worst defensive teams in recent memory even when they had LeBron, let alone now.

Young is also prone to making mistakes and producing inefficient nights; the prime example being his performance against the Mavs on Wednesday.

The Hawks floor general finished with 17 points and 5 assists but it came on 3-12 shooting with five turnovers and a whole lot of foul trouble.

But that sort of thing is typical for rookies.

More concerning is the fact that Young is a complete non-factor when it comes to defence and rebounding.

He simply doesn’t have the frame or instincts to carry out either task at a high level.

And yet his freakish offensive ability remains just so tantalising, and that alone has been enough to launch him into the (very) early ROY conversation.

Young will have his work cut out against Doncic and Ayton – two of the best rookies of recent years – but from what we’ve seen so far, it wouldn’t be crazy to think he could win it anyway.