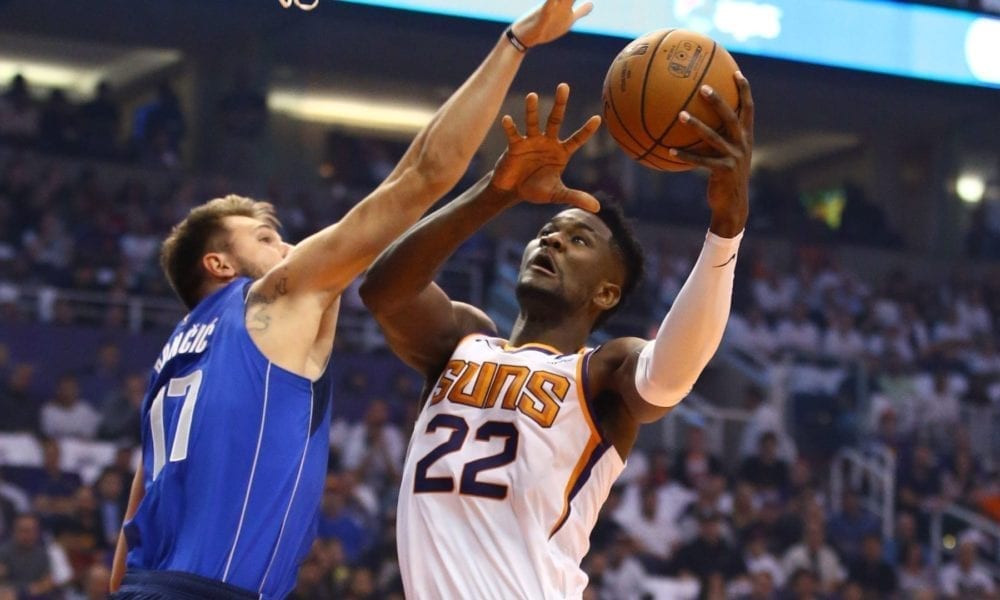 They don’t play the same position but it wasn’t long before the two most NBA-ready rookies got isolated in a one on one situation.

Deandre Ayton drew first blood, getting the bucket and forcing a foul on Luka Doncic in the game’s opening minute. He completed the traditional three point play but there’s nothing traditional about Ayton. He’s super athletic and has range on his jump shot, which he showed off in the opening quarter on his way to 8 quick points.

But Doncic was not daunted.

His first stat was a defensive rebound, which he converted into a one-man fast break. A beautiful wrap-around pass to set up DeAndre Jordan’s first points as a Dallas Maverick.

With the ball in his hand Doncic looked totally at home, finishing around the rim and dishing three beautiful assists in the opening stanza – the third one a spectacular behind the back bounce pass to Jordan. But that was the good news. The bad?

“…He’s struggled a little bit on defence, picked up two fouls.” That was Rick Carlisle’s summation at quarter time.

The 19 year old got caught reaching against Ayton and then didn’t hold his position while attempting to draw a charge. Those two fouls led to the customary benching, halting the youngster’s momentum.

Ayton meantime continued on his merry way, easily taking advantage of Wesley Matthews in the post and signalling to teams they would be unwise to switch him on to a smaller player in future.

Doncic didn’t look as comfortable when he returned midway through the second quarter, missing a couple of jump shots and then awkwardly getting out of the way when Devin Booker took it to him in the lane.

He got his third foul anyway a short time later, getting tangled with Ayton on a lob into the paint. Benched again.

Neither rookie did much for most of the third period until a rebound, and coast to coast layup, reminiscent of Ben Simmons, reignited Doncic and got the Mavs within 10 points. A couple of missed floaters and a bad turnover punctuated an up and down debut.

Multiple airball three pointers capped off a forgettable second half.

Ayton on the other hand let the game come to him. Unlike Doncic he had plenty of help from fellow rising star Josh Jackson and veteran Trevor Ariza, the pair combining to shoot 8/13 from three point range.

Dallas trailed by double digits most of the game but did narrow it to four points midway through the final period.

The biggest star on the court then stepped up, Devin Booker torching the Mavs inside and out on his way to 19 points in the period and 35 for the game.

The headlines going in were all about the rookies but it was the man with the richest contract who put the result in the book.

But what of the rookies? Their comments post game reflected the 121-100 final score, in favour of the Suns.

“I had a lot of fun,” Ayton said. “This is the most fun I’ve ever had playing basketball. Being at the top-top level, I wouldn’t say I had one bad thing to say about this game.”

Doncic said he “was really happy that I could make my dream come true, but it wasn’t the best game.”

Ayton finished with 18 points on 8/11 shooting, with 10 rebounds and six assists while Doncic had 10 points, eight rebounds and four assists but missed all five of his three point attempts and shot 5/16 in total.

A clear edge to the number one pick in this one but there will be plenty of opportunties for the Slovenian to make up for it as the season progresses.