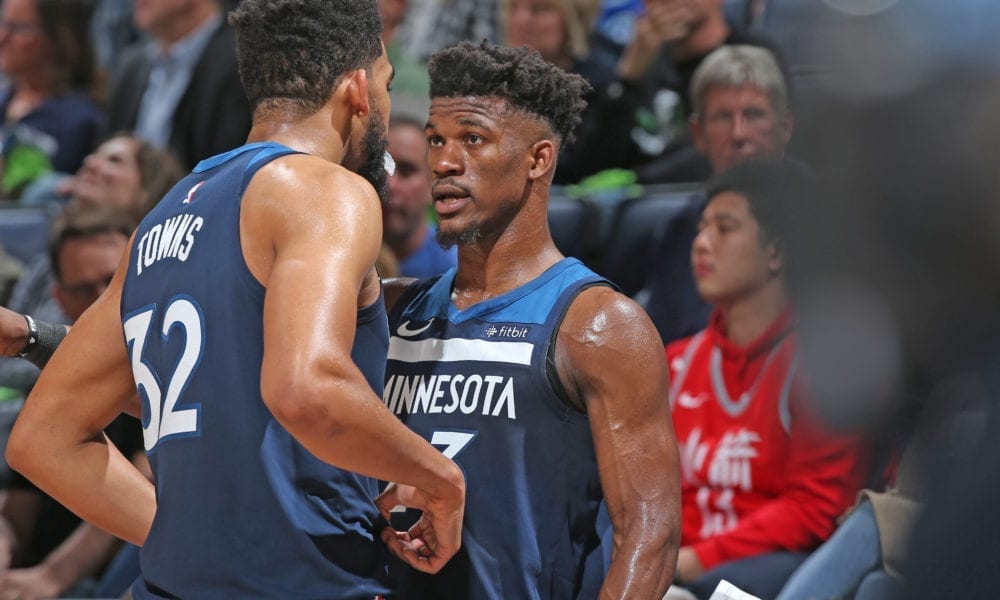 Minnesota Timberwolves’ management is in damage control, a day after Jimmy Butler returned to practice and created a media tsunami.

With the regular season less than a week away they cancelled one of the few practice sessions they have left and have denied journalists eager for the latest on this extraordinary story.

Butler himself called a players-only meeting on Thursday in an effort to reassure them he “would compete” with his teammates if he hasn’t been traded before their opening game against Minnesota on October 17.

If you’re just catching up on this story it’s worth re-living the events of the previous 48 hours.

After being absent from the team throughout training camp – in the wake of a trade demand – Butler reported to practice on Wednesday.

Unlike many players in this scenario – who avoid direct contact with management, coaches and teammates during tumultuous periods – Butler walked right in and got stuck in. Literally and figuratively.

According to reports – which Butler has said “are mostly true” – the four-time all-star teamed up with bench players and took on the starters in an intra-squad scrimmage. And he completely dominated proceedings.

Those same reports indicate he looked at Minnesota GM Scott Layden, while he was on the floor, and said, “You F—ing need me. You can’t win without me.”

In scenarios like this it is even more unusual to follow up such an outburst with a sit-down interview with a national broadcaster.

But that is what Butler did. He spoke with ESPN’s Rachel Nichols to explain himself. He first explained his actions today.

“I love the game and I love to win and that’s all I was out there doing, was competing. And right now, I know Thibbs. He’s in there by himself, he’s locked his door and he’s laughing. He’s smiling.”

Some have suggested his return to practice suggests his relationship with the Timberwolves can be repaired.

His answer to that? “It could be, But do I think so? No. Cause you got to be honest.”

Butler also used the interview to clarify some of the reporting surrounding his trade demand. He says he made the demand just four days after the season ended and not – as some have suggested – weeks before the start of the upcoming season.

Why is he so upset with Minnesota?

“It’s not about money. It’s about saying we need you. We want you hear. We can’t do this without you.”

Feeling underappreciated in the work place is common in all walks of life. Whether it is about money or not, he did turn down a four year, $100 million dollar extension a few months ago.

What happens next? His team plays wrapped up its final preseason game away at Milwaukee on Friday. Butler didn’t play and according to his coach he’s back in Minnesota working on his conditioning.

The Timberwolves open their season on Wednesday on the road in San Antonio.