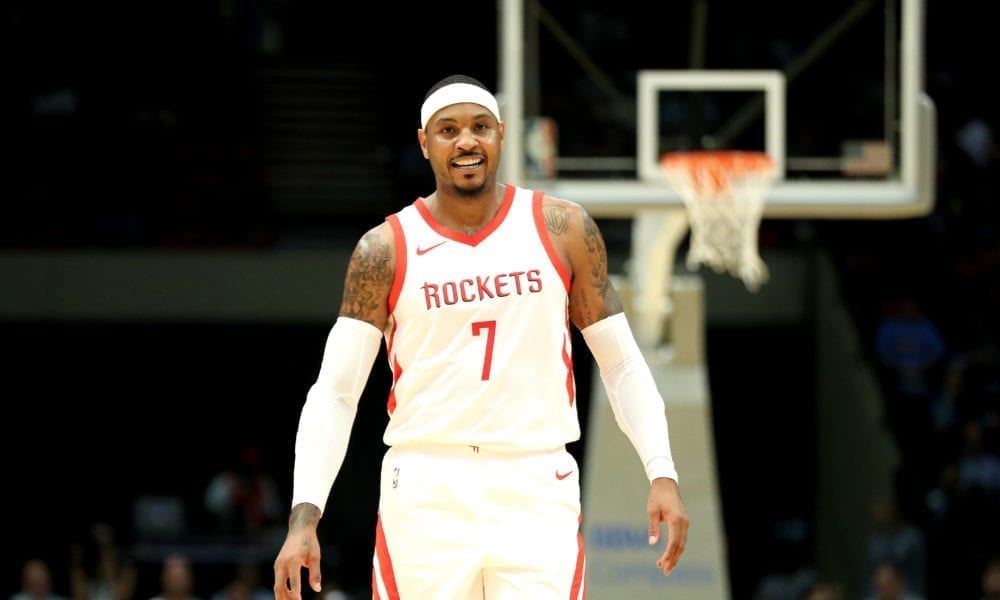 James Harden summed up Carmelo Anthony’s progress after his second half hot streak closed out another preseason win, this time against old rivals San Antonio.

The Melo comeback campaign is in full swing, he’s shooting 50% from 3 point range through three games and proving a more than useful weapon in Houston’s high octane offence.

He was cold to begin the game against the Spurs but didn’t miss a shot in the second half, including a 10 point spurt in less than three minutes that put the game to bed. Coach Mike D’Antoni is appreciating his new offensive weapon.

“He is going to be perfect because James [Harden] and Chris [Paul] won’t have to carry the load. He can make plays. His game too, toward the end of games, is with mid-range – post ups are good… it gives us another big option”, the coach said afterward.

The versatility Anthony is providing isn’t going unnoticed. He used to whine about playing power forward at the Knicks but he’s logging big minutes at center right now. If you believe the man himself, he doesn’t even realise he’s being asked to play the five spot.

“Sometimes I’m out there at that position and I don’t even know I’m playing the 5 to be honest,” Anthony said after his latest run as the biggest defender on the court.

There’s also plenty of evidence that Melo’s numbers only need to improve a little, from a year ago, to be considered deadly in this high octane Rockets’ offence.

Everyone remembers Anthony being bad in the playoffs last year – and he was – but his regular season numbers last season were surprisingly serviceable.

He scored 16 points per game for the Thunder last season and his shooting numbers might surprise you. He shot 44% from 2 point range and 36% from 3.

Many experts think Houston took a step back this offseason, losing Trevor Ariza, but it’s a case of so far so good with Anthony, James Ennis and Michael Carter-Williams looking suddenly very effective in the Rockets’ Lamborghini offence.

D’Antoni again, “At the end of the day, we’ve got a lot of talent, and if we can put it together we’re going to be really good. So, are we going to win a title? Nobody knows yet. There is a long way to go.”