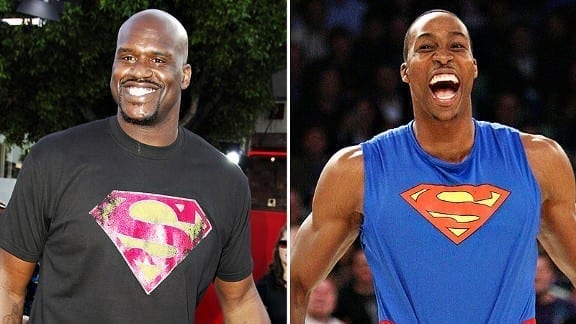 Shaquille O’Neal and Dwight Howard have been at it for years.

O’Neal doesn’t like that Dwight took his superman nickname (despite Dwight’s body being a spitting image of superman’s and Shaq being historically overweight), while Howard doesn’t like that Shaq is a total meanie all the time.

But according to Dwight, there’s a deeper cause behind all of Shaq’s not-so-thinly-veiled insults.

“I think it’s a little insecurity on his part because people call him ‘Superman’ and they call me ‘Superman’,” Howard told NBC Sports’ Chris Miller.

“But if I’m an older guy and it’s younger players that are being compared to me and they have that same nickname, I want to feel good about it.

“I just think it comes off to me as a little bit insecure when you’re taking shots at somebody that’s 10, 12 years younger than you.”

Howard doubled down on his Shaq attack, saying the big fella’s retorts said more about O’Neal than him.

“He got rings, I’m not in his league and all that stuff.

“But if that’s your only way to come back at all players, then you really don’t have too much to say.”

Shaq’s latest comments were in response to Dwight challenging him to roast battle via Instagram.

And despite Howard’s response, it certainly feels like he’s still craving Shaq’s approval.