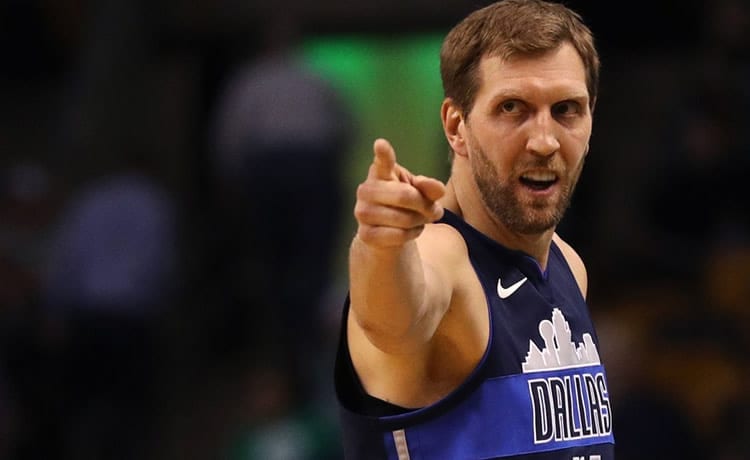 When Dirk Nowitzki was drafted in 1998, Bill Clinton was president, mobile phones were heavy enough to throw your back out and Ben Simmons was gearing up for his second birthday party.

It’s almost hard to comprehend that names like Nowitzki, Carter and Ginobili are still active in 2018.

As everyone turns their attention to a new age of athletic super freaks, we’re taking a moment to reflect on the greatest golden oldies still doing battle on the hardwood.

Oh, and if they haven’t officially retired, we’re counting them as active.

At 41-years-of-age, Vince Carter is significantly older than a long list of former players who haven’t seen the NBA hardwood in, well, forever.

Shawn Marion, Luke Walton, Earl Watson and Al Harrington are among those who spring to mind.

Drafted in 1998, everyone from his class not named Dirk Nowitzki or Paul Pierce retired what feels like decades ago.

Have a look at when everyone else picked in the top 10 finished up in the NBA.

Carter has played ELEVEN years more than the man picked way ahead of him at number one!

Despite being well and truly removed from his ‘Half Man, Half Amazing’ days, he’s still showing occasional bursts of the old Vince.

In December, Carter became the first player since 2003-model Michael Jordan to score at least 24 points at 40-years-of-age.

And even though many of us are busily complaining about all sorts of aches and pains by the time we hit 40, Carter has shown he can still throw it down with ease.

The more things change, the more they stay the same.

That isn’t to say his skills aren’t still there, but these days he doesn’t so much run as shuffle, his arms working furiously by his sides as if he knows his legs can no longer get the job done on their own.

And yet, between the reminders that Father Time is catching up with the towering German, he still has those moments filled with that trademark Dirk magic:

And yet, through it all, Nowitzki says he’s still feeling good and enjoying the game.

So who are we to say it’s time he called it quits?

Remember when we all thought it was time for Manu Ginobili to retire after his disastrous showing in the 2013 Finals?

He was certainly considering it, if numerous reports are to be believed, and it felt like the general consensus among analysts – as much as they hated to admit it – was that Ginobili was likely done.

Of course, he then came back and helped the Spurs clinch the 2014 title in one what became one of the greatest redemption stories ever told.

Then there was the season before last.

With San Antonio minutes away from bowing out of the Western Conference Finals at home, Gregg Popovich substituted Manu out of the game with just 2 minutes and 25 seconds remaining.

No one in the arena knew if it was Ginobili’s last game, but many suspected it would be.

The one thing they knew for sure was that they were going to give Manu the send-off he deserved right then and there, just in case.

But, once again, he returned.

Whenever it seems Ginobili might have fallen, he rises again.

You’ve got to hand it to Jason Terry.

The man is 40 and still playing minutes for a playoff team.

And whether it’s jumping on the scorer’s table after throwing an alley-oop or blowing into Lance Stephenson’s ear, JET is playing with no less fire than he always has.

It’s been said by several of his former teammates that the day after Jamal Crawford retires, you’ll find him at the local YMCA playing pickup.

Few players love basketball as much as Crawford.

Few have aged as gracefully too, and he’s done so in more ways than one.

The baby faced Crawford looks like he’s 22-years-old, and his game is a reflection of that.

The man they call J.Crossover has his limitations, but he’s more aware of them than he used to be.

For someone of his age, Crawford is still capable of producing those electric moments more often than one could reasonably expect.

Udonis Haslem has been with Miami for so long that he made his debut playing alongside the likes of Rafer Alston, Caron Butler and Lamar Odom.

It was the same calendar year his hometown Heat retired Michael Jordan’s jersey.

Having gone undrafted and played his first year of professional basketball in France, the formerly overweight and undersized Haslam was lucky to earn an NBA contract at all way back in 2003.

The fact he’s still in the league and still with the same team is quite remarkable.

Only 11 players have ever achieved the latter feat, and Haslem is the only one to ever do it in the city he was born and raised.

Despite the somewhat worrying start to his professional career, Haslem worked himself into one of the Heat’s most important pieces.

He came to embody the team’s heart and defensive identity.

Eventually, he became their all-time leading rebounder too.