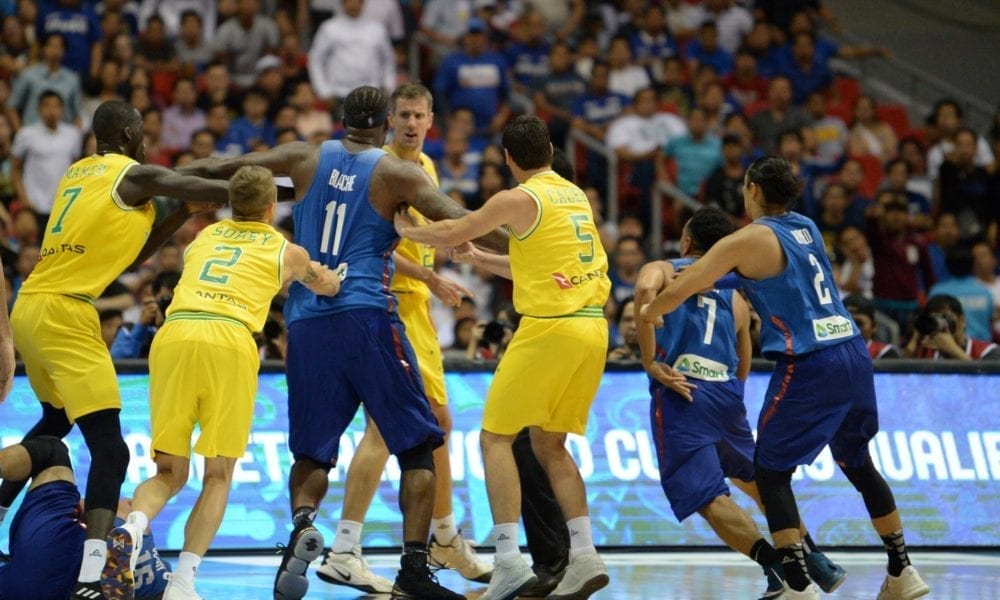 Speaking at an emergency press conference on Tuesday morning, Moore said that while the actions of both teams were highly regrettable, there was no reason for anyone else to get involved.

“While we accept responsibility for our role in last night’s incident, what we don’t accept is the action whereby fans and officials actually get involved in the fray,” he said.

“We absolutely find that unacceptable and whilst we’ll be waiting for FIBA to provide us with their findings and sanctions, that’s certainly an issue we’ll be addressing with them.”

Huge fight breaks out at FIBA tournament 😳 (via @camillenaredo) pic.twitter.com/qQ2uE5ltzA

Moore was largely referring to the mob which attacked Australia’s Chris Goulding while he was pinned to the ground behind the basket, as well as the man who punched Nathan Sobey in the face.

“It was alarming when you see a congregation of players at the end of the court and you say ‘is one of our players really under there?'” Moore said.

Wild scenes during the #Boomers game. Photo of a sickening punch to Nathan Sobey by a Phillipines offical during the melee. Disgusting. pic.twitter.com/JQoDwNCFIJ

It was this level of violence which also enraged Goulding’s agent, Daniel Moldovan, who promptly called for the resignation of Philippines assistant coach Jong Uichico.

“Your words are hollow,” Moldovan tweeted in response to Uichico’s public apology. “You didn’t act like a father who cares about his sons. You acted like a classless animal with zero brains. Hand in your resignation, your country deserves better.”

Your words are hollow. You didn’t act like a father who cares about his sons. You acted like a classless animal with zero brains. Hand in your resignation, your country deserves better. pic.twitter.com/P9CAxeGwLc

Basketball Australia has since confirmed that all of its players escaped significant injury, but Moore did say he was “absolutely concerned” about the players’ mental health.