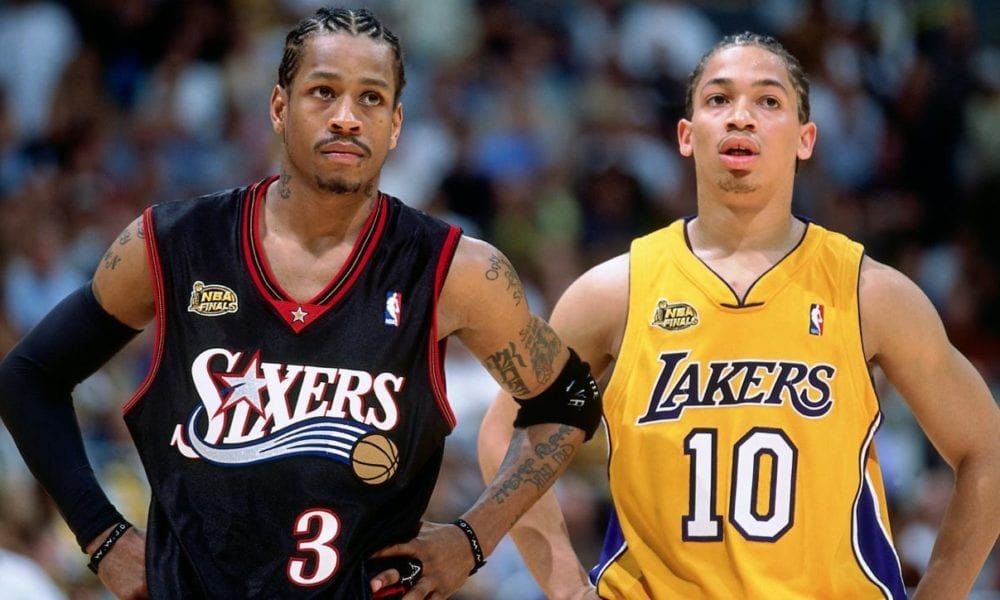 AI shook Lue with a step-back between the legs move, before nailing a jumper in his face and stepping over him as he fell.

Few moments are as iconic – it’s right up there with the Jordan shrug – and it’s hard to find a greater display of on-court dominance within a single physical act.

It also lives on as a wildly popular meme, a full 17 years later.

Ronaldo to Messi this World Cup. 😂

It’s a moment basketball fans love to relive on an annual basis, especially in June.

This year, however, we’ve collected a bunch of quotes from that night to form a miniature oral history.

Why listen to the so-called experts give their take when you get it straight from the men who were involved?

Gary Moore, Iverson’s long-time manager (via Nice Kicks): I remember walking into Staples Center for Game 1. He had on a number three Eagles football jersey and was just full of confidence. He was going to war.

Tyronn Lue (GQ): With about six minutes to go in the third quarter, AI already had like 40 points. The Sixers were leading by 15 points. My job was to deny him the ball. After I checked in into the game, he only scored 10 or so more points.

Todd Boyd, author of Young, Black, Rich, and Famous (GQ): Lue was sort of holding it close for the fourth quarter. Then Allen hits that three on him in overtime, and Lue falls down, and Allen steps over his head. That’s one of the iconic images in NBA history.

Allen Iverson (GQ): I just felt like he did a lot of grabbing and holding. It kind of frustrated me. A lot of times, I had my way with him.

Lue (ESPN): I fall down and he steps over me. People act like I got crossed over and I fell and he stepped over me. So, it doesn’t bother me. We won the championship. That’s all that matters. It’s all about winning.

Jorge Sedano (SportsNation): That’s the worst disrespect I’ve ever seen on any floor.

Lue (GQ): I knew he was frustrated, and that was just something to try to show me up. Evidently, it worked, because that’s all anybody talks about. As the series went on, we got into it. I don’t think we liked each other much.

Shaquille O’Neal (The Undefeated): I was extra mad (that Iverson led Philadelphia to a shock Game 1 win) because I was trying to go 16-0.

Moore (Nice Kicks): I’ll never forget him coming off that floor, and he said, “We just provided the Kryptonite, and we beat Superman!” It was phenomenal.

Lue (ESPN): When I was going places it was, ‘Oh, that’s the guy Allen Iverson stepped over!’ Well, if you know that then you know me, so that’s fine. I don’t have a problem with that.

Lue (ESPN): After the Finals, probably four or five years after, we hated each other. But then after our careers went along, we became pretty close and had a good bond. He’s really a good friend of mine.

Iverson (GQ): I’ve got a problem with people who play scared. Tyronn Lue took it as a challenge, like a man.

Lue (Bleacher Report): “The step over definitely made me famous. The thing with Allen Iverson is, he made me…If Milwaukee would have beat Philly (in the Eastern Conference Finals), I wouldn’t have played. So that could have possibly been my last year in the NBA. People don’t understand that… Iverson making it to the Finals really saved my career. Without Iverson, there probably wouldn’t be me.