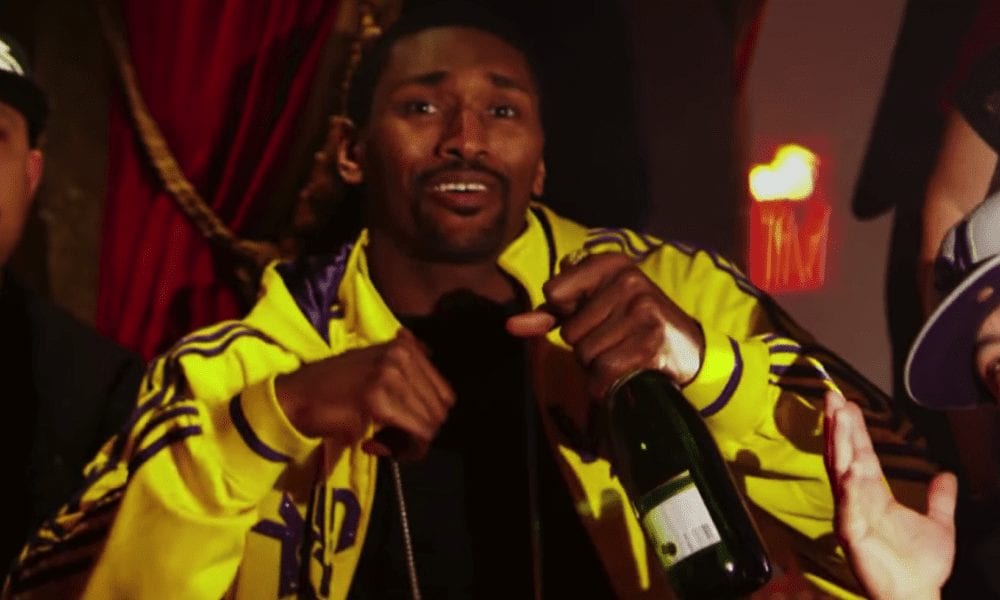 You already know he was responsible for the nastiest brawl in NBA history and that – presumably over a joint or seven – he decided to change his name to Metta World Peace.

But there’s so much more to the legend of Ron Artest, a man who was apparently still in the league as recently as last season.

So almost a year after he hung up the sneakers, here’s a bunch of other unbelievable shit he did during his famously tumultuous career.

Oh, and for the purposes of this article, I’ll be referring to him as Ron Artest, not Metta World Peace, because (a) that was his name when most of this stuff happened and (b) calling yourself ‘Metta World Peace’ is objectively ridiculous.

Before his rookie season began, Artest filled out a job application for electronics retailer Circuit City, thinking it’d be a great way to score some discounted goods.

The Bulls, who foolishly forgot to put a “no moonlighting at electronics stores” clause in their contract, ultimately intervened before he could make his Circuit City debut.

“I thought it would be fun,” World Peace later said.

“And I had a friend who worked there.”

Not only did Artest once break Michael Jordan’s ribs during a pickup game in 2001, he didn’t even realise what he’d done until he read about it the next day.

“I’m not sure what happened,” Artest later told the Chicago Daily Herald. “I was just guarding him. I was just trying to get position because he was posting me up. I don’t even recall him stopping for a brief second. … I read it in the paper and was like, ‘Man, Mike’s ribs got broke. How’d his ribs get broke?'”

Artest once confessed to Sporting News that he used to knock back Hennessy during games.

“I’d just walk to the liquor store (near the stadium) and get it.”

If it wasn’t enough that Artest appeared on the cover of a dirty magazine (the way one does), there was plenty more to read about inside.

This is where things get dark.

In 2007, Artest pleaded no contest to a misdemeanour domestic violence charge following a dispute with his wife.

He was then sentenced to 20 days jail and community service.

However, it was later ruled that Artest would only spend 10 days behind bars, serving the rest of his time in a work release program.

The NBA suspended him for seven games to begin the 2007-08 season as additional punishment.

Having a kid is said to broaden a lot of people’s perspectives.

But Artest was such a party animal in his younger years that he didn’t let having a child get in the way of that, partying like it was 1999.

“When I was a 19-year-old father, whew, I was a single pimp!” he told Sporting News. “I was wild. A lot of marijuana and alcohol—even before (that age).”

ASKED THE PACERS FOR TIME OFF TO PROMOTE HIS RAP ALBUM

But in Artest’s  case, it seems he once wanted to be a rapper more than a baller.

So much so that he asked the Pacers for some time off to promote the release of his new album.

The team declined, and benched him for two games instead.

But less than two weeks later, Artest got all the time off he needed, getting himself suspended for an entire season for his starring role in the Malice at the Palace.

After his Indiana Pacers suffered a frustrating loss to the New York Knicks during the 2002-03 season, Artest reacted the way all reasonable human beings would: smashing the nearest TV camera into a million pieces.

It’s a miracle James Harden can remember the 2012 playoffs after Artest brutally elbowed him in the head during the first round.

It was an unprovoked attack and the league later suspended Artest for seven games, costing him $430,000.

He also once pushed Caron Butler into the stands and whacked Paul Pierce five seconds into a game.

When Artest scored despite being fouled one night in Miami circa 2003, he approached the Heat’s bench flexing.

The bruising Pacer promptly began exchanging unpleasantries with an enraged Heat assistant, before brushing against Pat Riley and getting into a shouting contest with him too.

Artest was subsequently called for a technical foul, before offering an obscene gesture to the Miami crowd on his way back up the floor.

You already know how this story goes.

Artest gets into it with Ben Wallace, chills on the scorers’ table, gets nailed by an airborne drink thrown by an idiotic fan, jumps into the crowd, hits the wrong guy, and all holy hell breaks loose.

In the aftermath, the NBA suspended Artest for the remainder of the season (including the playoffs).

It was the longest suspension following an on-court incident in league history and he also lost about $5 million.

All up, the league suspended nine players a total of 146 games and fined them $11 million all up.

It took the franchise years to recover both on and off the court.