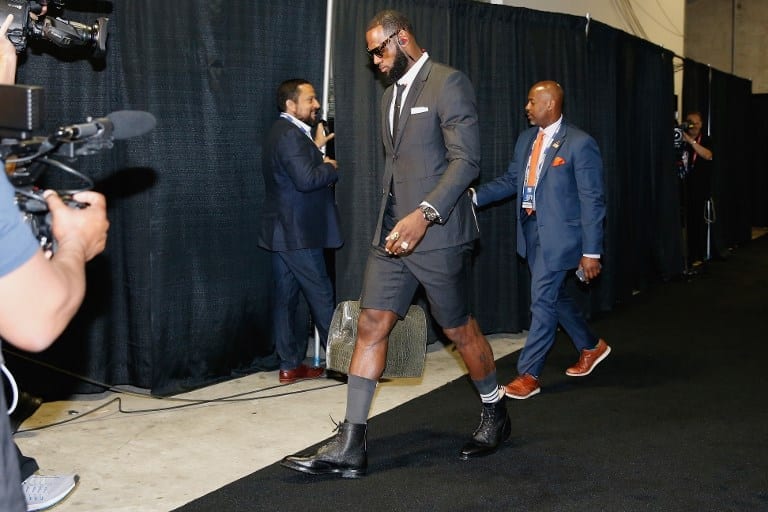 I hardly ever wear suits.

So when I do, I find myself agonising over the details.

I analyse every conceivable option and variation.

And yet, at no point did I consider wearing shorts.

Maybe that’s why LeBron James is an NBA star and I’m not (nothing to do with genetics obviously).

When LeBron showed up to Game 1 of the Finals wearing that snazzy getup cut off at the knee, Twitter went crazy.

It was the kind of meltdown usually reserved for the Springfield Nuclear Power Plant when Homer Simpson falls asleep at his desk.

Better still, that credit belongs to his most despised rival, the man who recently skewered his left eyeball:

When Green showed up to Game 2 in shorts, reporters asked him whether he was trolling James.

Draymond denied it and took the opportunity to let everyone know he’d been rocking the outfit long before ‘Warriors vs Cavs IV’.

“I’m not really psyching nobody out,” he said. “It gets kind of warm in this room so these shorts go well — they’re just a little linen so it aint too hot in here right now.

“I think it’s a cool look. I started that trend a long time ago. Go check the pictures.”

SLAM Magazine did exactly that, putting their best men on the job.

They spoke with Green’s personal stylist Vick Michel, who confirmed Green came up with the idea to roll with suit shorts two years ago.

The photographic evidence seems to check out, with this particular shot taken at the NBA Awards last year.

After prevailing over LeBron in the first two games of the Finals, it looks like Draymond has won the fashion war too.

Only some pointed advice from Russell Westbrook can save LeBron now.