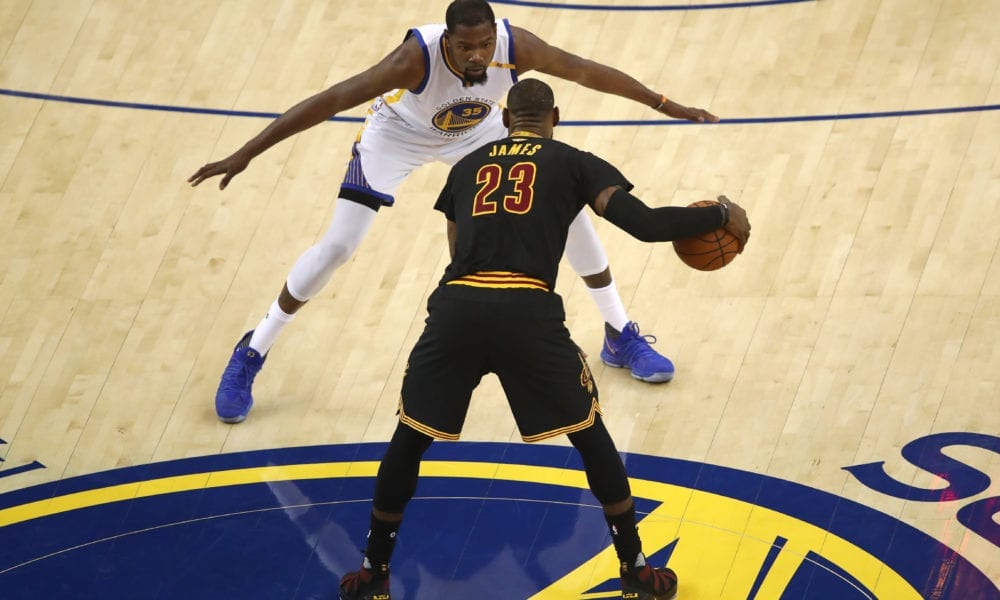 You’d have to cast your mind back a long way to recall a heavier NBA Finals underdog than the 2017-18 Cleveland Cavaliers.

Just ask the folks in Vegas, who have listed Golden State as -1060 favourites, the highest compliment paid by the bookmakers during the Finals since 2001.

It’s a series which brings a lingering sense of inevitability and many have wondered aloud if there’s much point in playing the games at all.

But there are in fact some things the Cavs can do to make a series of it.

Some of them could be long shots, but they also might just work.

I hate to be overly simplistic, but in the spirit of trying something new, these Cavs need to at least play some solid defence.

And while some of their players have incurable physical limitations, a sizeable aspect of achieving defensive success is effort, something that simply hasn’t been there for most of Cleveland’s season.

Tyronn Lue’s men will likely employ the same switching defence as the Rockets, despite having far inferior defenders.

This reminds me a little of one of my junior coaches trying to implement the triangle offence and expecting 12-year-olds to produce similar results to Jordan’s Bulls.

While the Cavs situation isn’t quite that bad, their reality is closer to my example than many in Northeast Ohio would care to admit.

The Cavaliers gave up 121.4 points per game in last year’s Finals and they’ve only diminished further as a defensive unit since.

If that doesn’t strike the fear of God – who famously hates Cleveland already – into Cavs fans, I don’t know what will.

The wine and gold were the second-worst defensive team during the regular season, conceding 109.5 points per 100 possessions.

But they’ve at least shown they can raise their game in line with the stakes, as they did during the playoffs with an improved 105.9 points per 100 possessions (seventh among all playoff teams).

However, that’s still nowhere near good enough to match it with Golden State and improving any further is going to be a tall order for the Cavs.

George Hill’s days of playing solid D appear to be behind him, Jeff Green enjoys a largely aimless existence at that end of the floor, Kevin Love and Kyle Korver don’t have the physical capacity to get shit done and JR Smith is JR Smith.

All this makes Ty Lue’s job about as enviable as BP’s CEO gig when they had the oil spill.

Draymond Green takes it as a personal affront almost every time an opposing team deliberately leaves him wide open on the perimeter.

But there’s a reason teams do this.

Green made just 30.1 percent of his threes during the regular season, his worst rate since his rookie year.

And that clip looks downright glorious when you compare it to his 2-17 shooting in the Western Conference Finals.

Cleveland would do well to expose Green as often as possible, especially considering they’re up against a team otherwise littered with the best three-point assassins in the business.

Bait Draymond Green into kicking someone square in the nuts

I mean, only if you want to.

They were a cumulative +371 through their 82 regular season third quarters and +130 across 17 playoff games.

Those numbers lie in stark contrast with the Cavs, who were a cumulative +6 across the entire regular season and -1 across 17 playoff games.

Easier said than done, I know, especially against a team as defensively gifted as the Warriors.

But three-point accuracy is absolutely essential to Cleveland’s success.

When the Cavs get hot from beyond the arc, they have the ability to run away with games.

And when they struggle, they look absolutely awful.

Few teams live and die by the three-point shot like these Cavaliers, and the numbers back that up.

During the regular season, Cleveland shot a cumulative 41 percent from three in wins, and just 31 percent in losses.

In the playoffs, they’ve made 38 percent from deep in wins, and only 27 percent in losses.

Someone hook the red Kool-Aid into Kyle Korver’s veins, because it’s time for an almighty three-point barrage.

Give Kevin Love the keys to LeBron’s hyperbaric chamber

Those things help with concussions, right?

If the Cavs can pull off most (or at least some) of what I’ve listed above, they can pinch a couple of games against a Warriors team that has struggled to stay engaged all season.