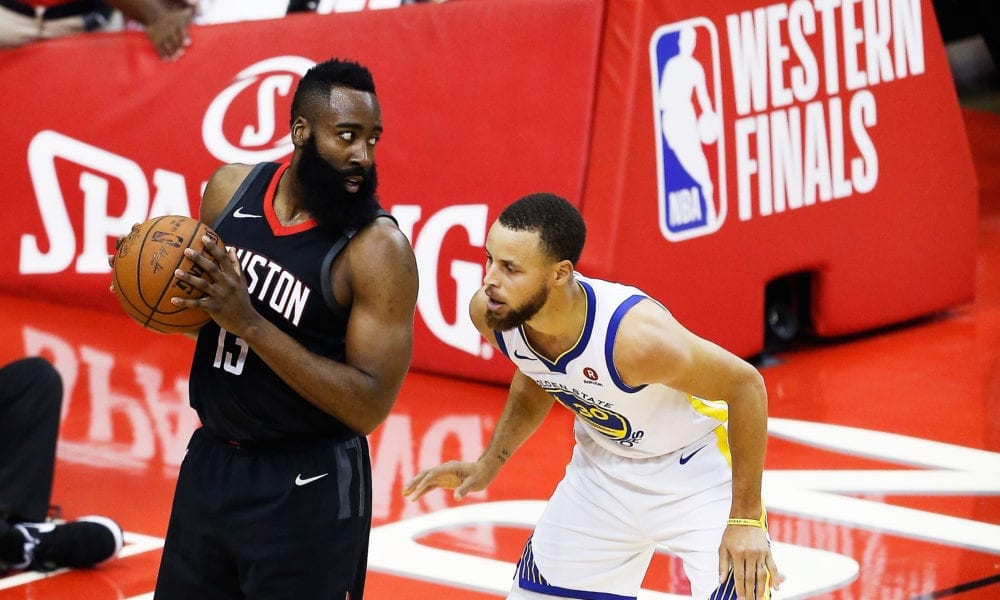 Shortly before Golden State advanced to the NBA Finals with a 101-92 win over Houston on Monday, footage emerged of Joel Embiid bouncing a basketball off the face of an unsuspecting defender on the streets of Philadelphia.

The innocent victim of Embiid’s admittedly hilarious crime was the human embodiment of helplessness.

In a world which contains the Durant-era Warriors, that helpless Philly hooper was all of us.

He also represented each and every NBA team outside the Bay Area.

For that hopeless man, and those 29 teams, there was nothing that could be done to prevent imminent destruction.

For him, the cause of death was Embiid. For every professional ball club in America, it was the Warriors.

While every squad in the league has been wiped off the map by Golden State (yes, I’m writing off Cleveland ahead of time), that realisation of certain death was especially painful for the Rockets because they were so close to cheating it.

And ‘certain’ is the operative word here.

Golden State might let you start any given game or series well, but they will ultimately turn it on when they need to.

They’ve trailed in four playoff series under Steve Kerr, and won all of them.

They’re like a cat toying with its prey, leaving it until the very last minute to tear it limb from limb, just to show they can.

Sure, the Rockets shot a horrific 7-44 from downtown in Game 7, but the Warriors played with complete disinterest for the entire first-half.

They habitually play down to their opponents.

If Houston closed the gap by shooting at a greater clip, or resurrecting Chris Paul, Golden State would’ve lifted with them.

Again, due to sheer boredom, these guys only start playing to their abilities when they absolutely have to.

And when that moment comes, their ceiling is unreachable.

On Monday night, that moment featured Kevin Durant hitting two shots over Eric Gordon like he wasn’t even there, all within the space of a minute.

He then darted to the hoop for a layup 18 seconds later, extending the lead to double-digits and running away with not only the game, but the series.

It all happened in the blink of an eye.

The worst part was, the Rockets had just cut the lead to six.

And if he wasn’t the one to do it, it would’ve been Steph Curry. Or Klay Thompson. Or some lethal combination of the three.

It just doesn’t matter if you bust your ass for the first 42 minutes, the Warriors will decide the outcome in the final six. Even if you constructed your team specifically to beat them.

This is what makes the Warriors who they are.

Rooting for them is like rooting for Amazon or BP.

They are an unstoppable global brand assured of complete domination.

At least for now.

All we can do is sit back, watch, and await the inevitable.