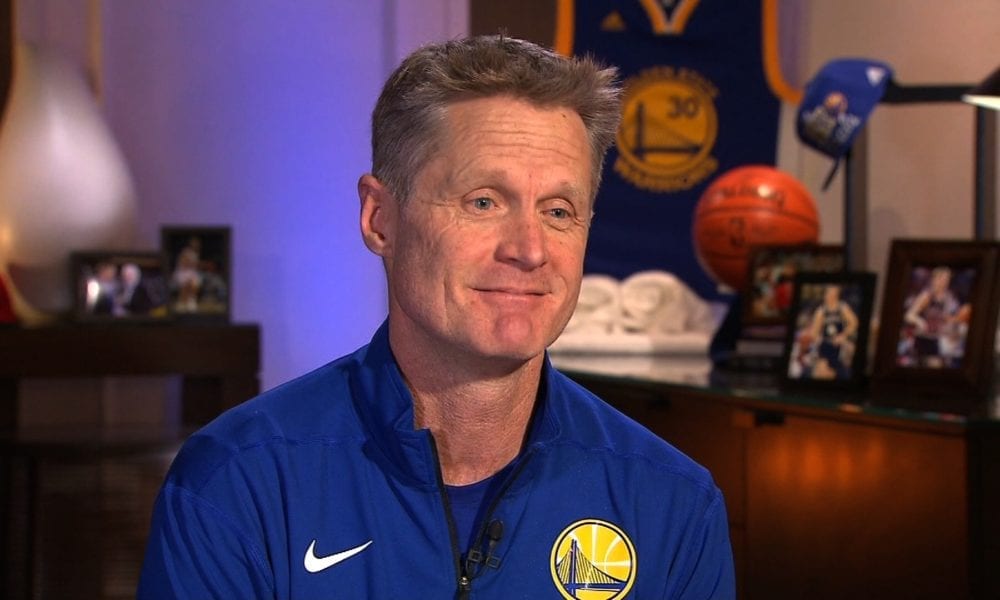 Steve Kerr has torn the NFL to shreds over its new anthem policy.

The rule is designed to prevent players from kneeling during the national anthem and Kerr was quick to label it “idiotic”.

“I think it’s just typical of the NFL,” Kerr said at shootaround on Thursday.

“They’re just playing off their fan base, and they’re just basically trying to use the anthem as fake patriotism, nationalism, scaring people. It’s idiotic, but that’s how the NFL has handled their business.”

The rule, which was approved on Wednesday, will see fines handed to the team of any player who kneels, while also giving them the option to remain in the locker room during the pregame ceremony.

NFL commissioner Roger Goodell stated on Wednesday the move had the support of the team owners.

But while many in NFL circles seem to be all for it, Kerr had a very different take.

And in blasting the NFL’s decision, Kerr also took the opportunity to praise the NBA’s progressive handling of social justice issues.

“I’m proud to be in a league that understands patriotism in America is about free speech,” he said. “It’s about peacefully protesting. I think our leaders in the NBA understand that when an NFL player is kneeling, they were kneeling to protest police brutality, to protest racial inequality.

“They’re weren’t disrespecting the flag or the military, but our president decided to make it about that and the NFL followed suit and pandered to their fan base by creating this hysteria.”

Kerr continued to emphasise that free speech was an essential pillar of America’s democracy, and by ignoring it in an attempt to uphold respect for the flag, the NFL’s actions were highly ironic.