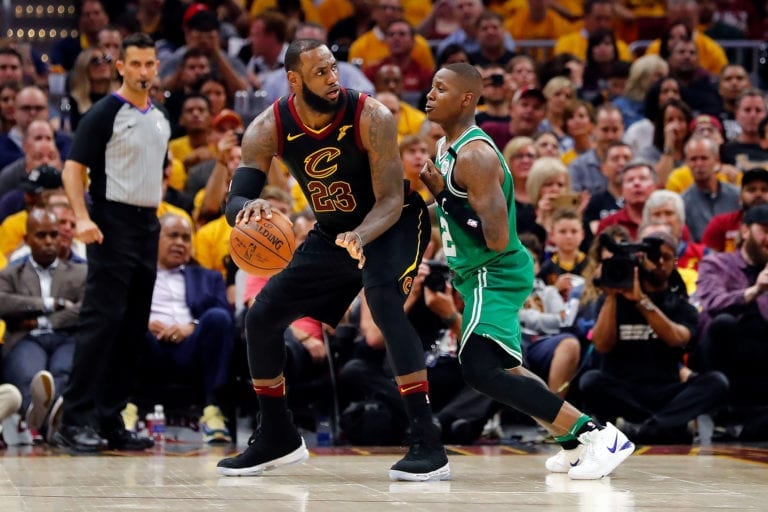 In tying the Eastern Conference Finals at 2-2 on Monday, the Cavs have put the pressure right back on the Celtics.

To get a handle on all the most recent developments in this ever-changing series, we present to you five key points from Cleveland’s crucial Game 4 win.

12-4 @cavs surge in the 1st on @ESPNNBA #WhateverItTakes pic.twitter.com/8IwaCZUExG

The Cavaliers take to catch-up basketball worse than most, and as a result it’s essential that they get off the good starts.

In Game 4, they did exactly that, jumping out to a 34-18 quarter-time lead and hitting six of their first 10 three-pointers.

This was fuelled in part by Kyle Korver and JR Smith hitting long range bombs, as well as LeBron James seeking out and punishing mismatches with no mercy (I mean honestly, it’s like he can just smell weakness).

The Cavs actually giving a shit on defence

It’s amazing what happens when you start committing yourself to defence.

The Cavs were hustling all over the floor on Monday, especially in the first-half, before Boston began to fight back and few of those classic Cleveland lapses crept back in.

But for the most part, it was a much-improved defensive effort from the Cavs and they had a wide spread of contributors to make it happen.

Al Horford might’ve finished the night with 15 points, but it took him 13 shots to get there and Tristan Thompson did a great job of forcing him into bad spots and bad shots.

His defence also had a broader effect, injecting life into the Cleveland crowd, and by extension, his teammates.

All it takes is for one guy like Thompson to make one or two big defensive plays and suddenly everyone else is inspired to do the same.

With the Cavs suddenly able to get bulk stops, they were frequently out in transition, where they do their best work.

Good things happening all over the floor. #WhateverItTakes pic.twitter.com/sORbjb6LBu

Much more describable than painstakingly trying to make things happen in the half-court before ultimately praying LeBron can create something out of nothing, don’t you think?

LeBron’s elite effort at both ends

Understanding that scoring alone wasn’t enough in Game 1 and 2, LeBron prioritised defence back in Game 3.

That night he took just 12 shots – still finishing with 27 points – and committing himself to defence in a way we haven’t seen in a long time.

Fast forward to Game 4 and he was back in offensive destroyer mode, but remained largely committed on defence.

Kyle Korver had some huge moments for the wine and gold on Monday.

Dude finished as Cleveland’s second-leading scorer with 14 points in 25 minutes.

Then there were the unfathomably rare moments of defensive inspiration, blocking Jaylen Brown not once but twice.

Korver’s defensive plays did just as much for comedy as the Cavs’ turnaround.

If Kyle korver blocks your shot twice there should be a penalty box! Vangundy!!

LeBron and Love auditioning for the NFL

This is not technically a ‘defining moment that swung Game 4′, but if local news has taught me anything, it’s always good practice to finish on a fun note.

These guys pull this off better than any other duo in the league.

Love’s full-court outlets to LeBron are more art than sport.

And this might just be their best one yet.

See you Wednesday for Game 5.