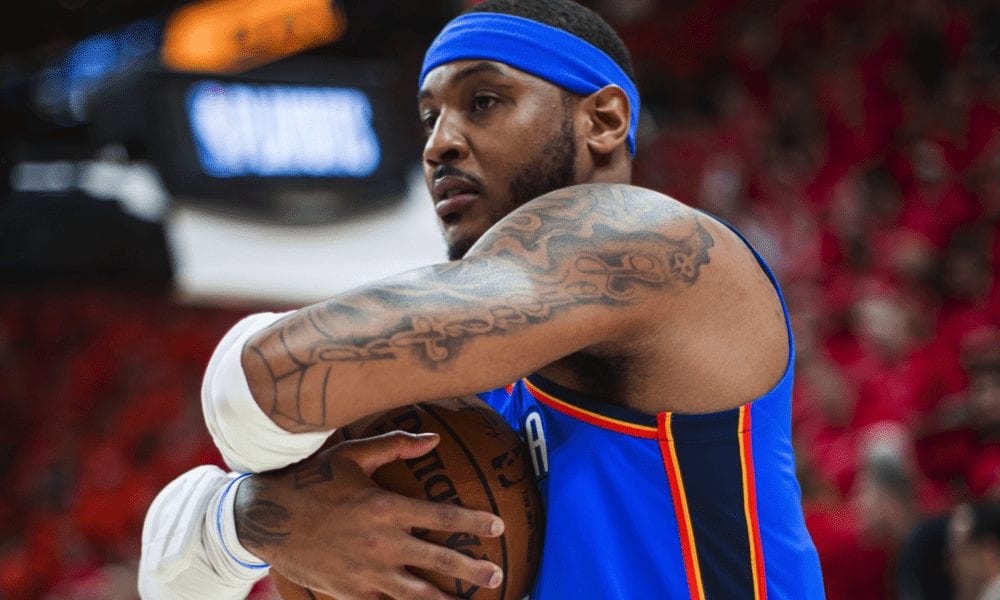 He wants to have the ball in his hands, call the shots and take the shots despite not having any of the ability to justify such demands.

Think of all the rage that guy instils in you, and then spare a thought for Russell Westbrook and Paul George.

For them, that guy is Carmelo Anthony.

Not only is modern day Melo very bad at basketball, but he seems to be convinced he’s 2008 Melo.

This is the problem with ageing superstars; their egos don’t decline when their game does.

There was no greater indication of this than Anthony’s most eye-catching exit interview comments.

“I’m not sacrificing no bench role,” he said at one point. “That’s out of the question.”

It was a comment which showed his inability to appreciate (a) his current value as a basketball player and (b) the fact his grammatically flawed sentence suggested he actually wanted a bench role.

Melo had a similar reaction in the preseason when he laughed at a reporter, who in passing had mentioned the possibility of coming off the pine.

For reference, Anthony averaged 16.2 points on 40.4 percent field goal shooting this season – both career lows – to go with a -14.3 net rating.

His game simply hasn’t fit within OKC’s offence (does it fit within anyone’s offence other than Team USA’s?) and it’s probably best if we don’t even discuss his defence.

Let’s just say it resembled your stoned roommate in college, moving from his most comfortable position only when absolutely necessary.

But the finishing blow here is unquestionably Melo’s lack of effort.

Among those to play at least 41 games and average 30 minutes or more, Melo ranked dead last league-wide in distance run per game, running (walking) 2.01 miles per game – that’s 3.23 kilometres for our non-American readers/metric fans.

To top it off, Anthony also comes in fourth-last in average speed per game.

The only players below him are Marc Gasol, DeMarcus Cousins and James Harden (presumably because of all that stagnant isolation action and dancing on the spot that Harden loves so much).

And by superstar defence, I mean ‘any defence at all’.

After bowing out in the first round, it will be very interesting to see how much longer OKC puts up with this.