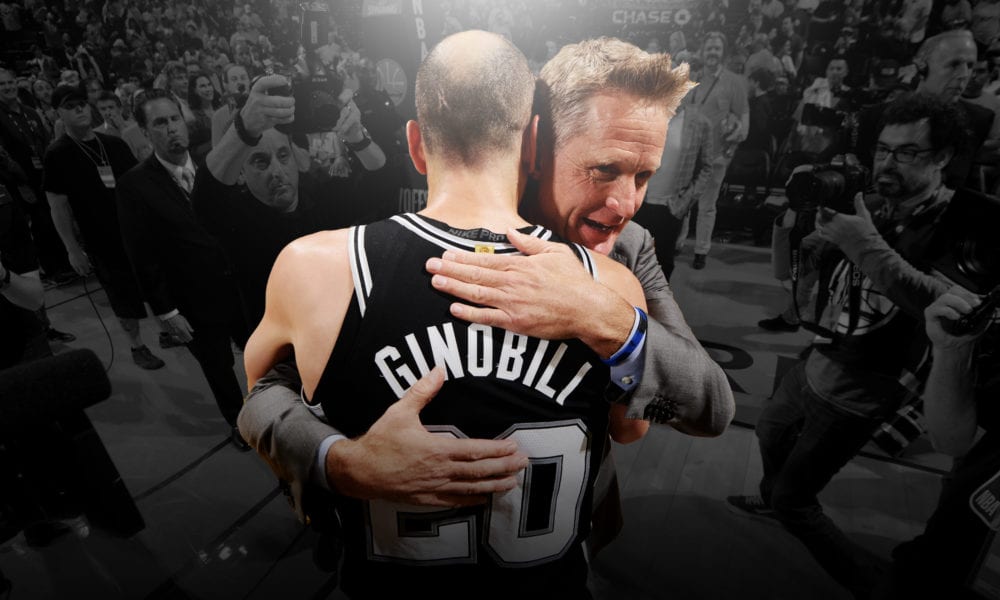 The San Antonio Spurs have had players that scored more points, won more championships and went to more all-star games.

But none have been as beloved as Manu Ginobili.

“I just told him I hope he keeps playing because he’s been just amazing for the league and so fun to watch night-in and night-out,” Kerr said post-game on Tuesday.

If this first round series defeat to Golden State is indeed his final on-court contribution to the sport, it’s been an incredible career.

Ginobili entered the league as a 25 year old rookie in 2002, having already won an Italian club championship and a Euroleague title.

He won Olympic gold two years later as part of the biggest upset in Olympic history.

But let’s take a moment to revel in what Ginobili has still been managed to do at age 40.

He spearheaded an upset game four win over the Warriors, with 16 points and five assists.

In game five he had 10 points, five rebounds and seven assists, the final three of which helped propel the Spurs to the verge of an impossible comeback on the road.

The next question of course likely won´t be answered for a while, according to the man himself.

“I’ve been contemplating retirement forever. Nothing has changed. I just don’t know. I will let one or two months go by and then see how I feel. I’m not the type of guy that makes decisions on the fly when you are upset or hurt or whatever. I will let it sink in and see how it feels¨, Ginobili said after the game five defeat.

Kerr certainly hopes he does, saying after game four, “I think he should come back two more years. I smiled when he made that corner three right in front of us at the end of the game. It was just so typical Manu: [40] years old and 16 points and hits the clinching three. He’s Manu. That’s what he does … I know he’s old because he was my teammate, and I’m old as dirt. So, if I played with him, he must be old.”

Ginobili´s possible looming retirement has been just one in a series of motivating factors.

Rudy Gay said this after game four, when asked about the likelihood of Ginobili retiring, “I mean, when you see Manu [Ginobili] out there, y’all think he is going to retire? He doesn’t play like that so that’s not in our mind, so we just wanted to have some self respect, go out there, play for these fans, play for San Antonio, play for Pop [Greg Popovich], play for everybody. It’s more than just basketball right now, you know we have to out there and play for our families, everything. It’s a lot on the line. You don’t want to just go out there and just give up. We worked too hard this season.”

Ginobili and the Spurs certainly didn´t give up in what was their final game of the season, improbably narrowing the gap from 16 to just two points in the final minute.

Kevin Durant countered with a huge shot, coming out of a timeout, that essentially ended the game and San Antonio´s season.

Whether Ginobili´s NBA career ends here is the next big question basketball fans around the world will be asking in the days to come.

Ginobili himself had this to say when asked whether personnel decisions would dictate his decision.