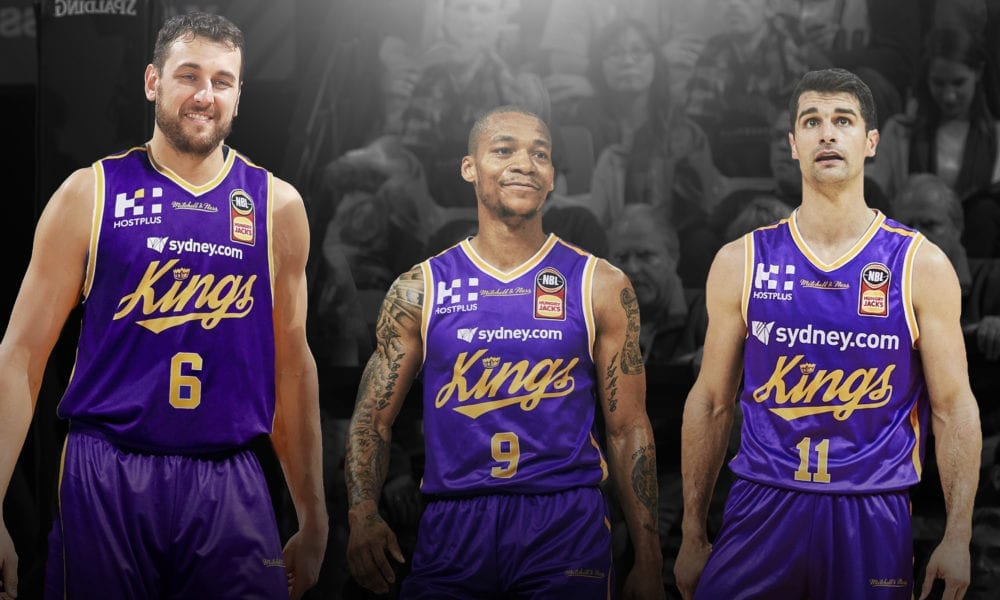 There is a seismic shift underfoot in the Australian basketball word, and the reverberations of the sport’s second coming have rarely felt stronger than they did in Sydney on Tuesday morning.

It was the day Andrew Bogut officially told the world he had come home to sign with the Sydney Kings.

As Bogut folded his lengthy frame into a chair at Tuesday’s press conference and began speaking in his typical candid fashion, there was a palpable sense of achievement in the air.

Alongside Bogut was his new coach Andrew Gaze, busily smiling to himself as if in stunned disbelief all this was actually happening.

NBL owner Larry Kestelman and CEO Jeremy Loeliger appeared noticeably calmer, but there was still a sense even their insatiable appetite for landscape-altering deals had been satisfied.

Well, at least until lunchtime.

The best part is, Bogut’s all in.

“We want to get this franchise back to where it belongs,” he said on Tuesday.

Bogut’s contract will run for two years and marks the end of his NBA career.

And he’s just fine with that if it means playing in a league he strongly believes in.

He’s so invested, in fact, that his agreement involves the possibility of a 10 per cent ownership share in the Kings post-retirement.

If all goes well, he’ll only want more.

“I want some skin in the game,” Bogut said.

“I want to see how viable this is and see where it’s going.

“If it goes as well as I think it will there is no reason why I won’t put my own money in as well.”

Anyone who’s been paying attention knows Australian basketball is once again serious business.

But Bogut’s arrival and genuine belief in the competition might just be the pivotal moment which removes any remaining doubt.

The Kings were never going to die wondering.

And it should surprise no one they beat their competitors to Bogut.

From the moment venue management group AEG Ogden took control of the team in March 2016, it was clear they meant business.

Shortly after the takeover, the Kings recruited Andrew Gaze to coach the team, while announcing the club would move to the 21,000 seat Qudos Bank Arena.

Suddenly, Sydney looked like they might just live up to their nickname, seemingly on the cusp of ruling the competition like they did during the early to mid 2000s.

But it wasn’t that simple.

Putting a star-studded team together rarely is.

After beginning that 2016-17 campaign with a 5-1 record, the Kings won just eight of their remaining 22 games and missed the playoffs altogether.

Then there was last year, which saw even more firepower arrive in the form of Perry Ellis, Todd Blanchfield, and eventually, reigning NBL MVP Jerome Randle.

But it wasn’t until after Randle arrived that Sydney found their way, winning eight of their last 13 games and six of their last seven.

It marked a league-best finish to the season, featuring two wins against Perth and a statement victory over New Zealand.

While the Kings’ late run marked promising signs for the future, they’d made it rain far too late.

This brings us to the present day, and if you thought the Kings would be satisfied standing pat with an already talented roster, you were sorely mistaken.

While some pointed out that a team of champions doesn’t always translate into a championship team, the Kings are firm believers in staying the course.

It’s a mentality which sounds similar to the Philadelphia 76ers’ famous battle cry, ‘Trust the Process’.

But Philly’s process involved stripping the team of talent in order to chase future success.

Sydney’s concept has been the opposite, loading the team with as much talent as possible, as soon as possible.

It’s all in an effort to not only make a splash, but a lasting impression.

Signing Bogut did both, in the biggest way imaginable.

Melbourne United, who also pursued Bogut, were able to play the hometown card while boasting a championship winning infrastructure.

When you throw in Bogut’s relationship with both Andrew Gaze and the Kings’ ownership group, it was hard to see him signing anywhere else.

As valuable as Bogut will be in a marketing sense, it’s his imminent defensive impact which has whipped coach Gaze into an excitable frenzy (although Drewey will be the first one to tell you it doesn’t take much to get him in such a state).

The Bogey Man has one of the most impressive defensive resumes in basketball.

His defensive impact in the NBL figures to be as dramatic as anything we’ve ever seen.

That’s particularly good news for the Kings, who came close to having the worst defence in the league last season, giving up 116.7 points per 100 possessions (almost 10 more than eventual champions Melbourne United).

Then there’s his passing, which is the stuff dreams are made of for most coaches.

Bogut’s vision and creativity with the ball will create all sorts of problems for Sydney’s opponents, even if they do somehow have the size and strength to match the big fella.

Picture the likes of Brad Newley, one of the best slashers the league has ever seen, darting to the hoop as Bogut finds him from the post in a variety of ways.

For that matter, imagine Jerome Randle creating off the dribble with the help of Bogut screens.

The towering Victorian will prove incredibly handy in oh so many ways.

Then there’s the less obvious stuff.

Anyone remotely familiar with the Melbourne local knows he doesn’t tolerate any BS and isn’t afraid to speak his mind.

He holds everyone accountable, and accountability was something the Kings lacked last season.

They didn’t have that clear on-court leader for much of the year and it cost them dearly.

Now they have a man who spent the last 13 years going to war against the best players in the world.

With a star studded line-up and two more import spots available, the Kings may just win their battle for sporting supremacy.