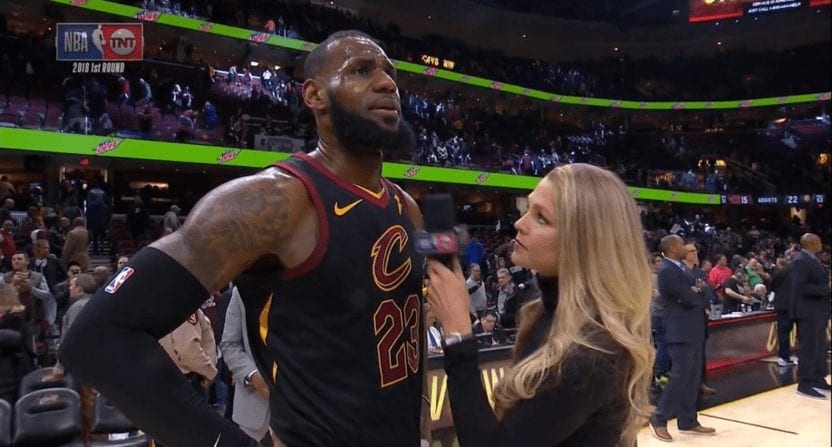 The pitchforks were out in record time when TNT reporter Allie LaForce asked LeBron James for his reaction to the passing of Gregg Popovich’s wife, Erin Popovich, on Wednesday night.

LeBron’s ensuing pause and emotional response led many to assume LaForce had broken the news to him without warning, and her integrity was promptly brought into question across the Twittersphere.

"That's such a tragedy. My best wishes go out to Pop and his family." – @KingJames on the passing of Erin Popovich pic.twitter.com/83dc09urac

Had LaForce done as many suspected, it would’ve been poor form indeed.

The only thing was, she hadn’t.

Just moments after one of the worst sides of social media reared its ugly head, LeBron used it to clear the air.

.@KingJames sends his thoughts and prayers to the family of Gregg Popovich, sets record straight on reporter’s question. pic.twitter.com/VCsFuEtFVU

“…A lot of people feel like I was blindsided,” James said via Uninterrupted, after again paying his respects to the Popovich family. “That is absolutely false. Allie LaForce told she was going to ask me the question and if it was OK. Once I started talking about it, once we were on air, actually my emotions just kind of took over…and that was just my emotions coming straight from my heart.”

“Also guys, please get off Allie LaForce’s back because she followed proper protocol and she warned me,” he said. “Get off her back, man, she’s very professional and she does a great job.”

There’s no doubt LaForce’s detractors were trying to stand up for what’s right.

But everyone was in so much of a hurry to rip her that they did so before finding out the full story.