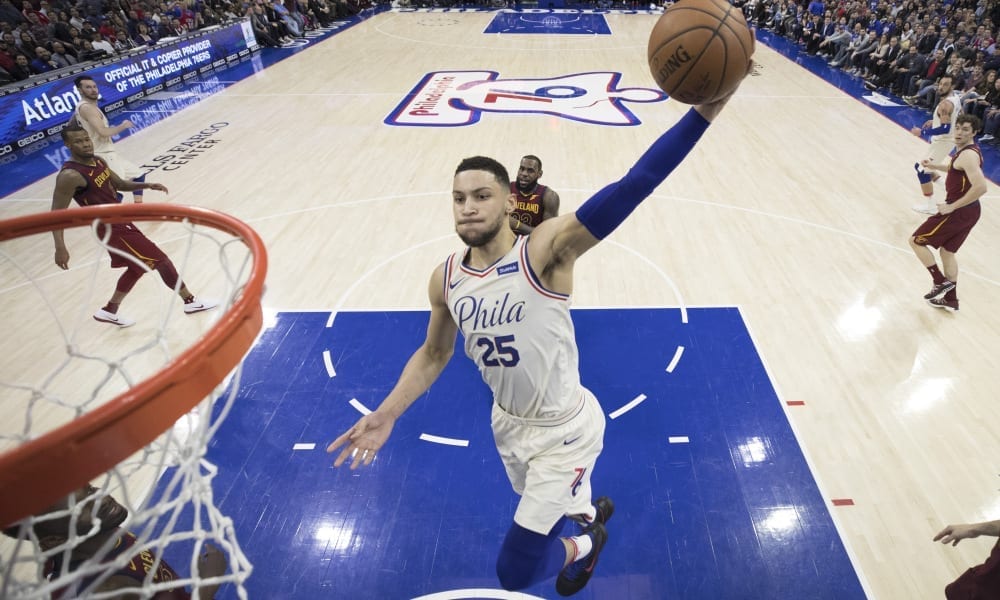 This season’s Rookie of the Year debate was red hot even before Ben Simmons shared his somewhat controversial thoughts on the matter and Donovan Mitchell let his hoodie do the talking.

But there’s no doubt Simmons is winning this thing.

His exceptional all-round play – which far exceeds scoring alone – has made him the irresistible choice, as has his ability to lead Philadelphia’s rapid transformation into a 52-win team.

The greater question is: where does Simmons’ rookie season rank all-time?

I’m so glad you asked…

This number one ranking will only be reconsidered under the following circumstances:

Another rookie puts up – at minimum – 18/7/7 and leads his team to the title while playing all five positions in the championship-clinching game.

I wouldn’t hold your breath.

There isn’t a whole lot separating a lot of the guys on this list, but it’s pretty hard to look past MJ with averages bordering on 30/6/6.

That simply should not be possible for a newcomer.

From day one in the league, the man scored as effortlessly as he converted oxygen into carbon dioxide.

He had that alpha dog mentality in the NBA right from the start – and the game to back it up.

David Robinson’s NBA debut was delayed for two years due to his military commitments, but he proved to be well worth the wait.

Robinson began his career on the Spurs’ 1989-90 squad which won 56 games and made the second round of the playoffs, after winning just 21 games the previous season.

While he wasn’t the only offseason arrival prior to his rookie, the NBA-ready force was certainly the most important.

Coming out of college, Tim Duncan was the epitome of a sure thing.

Rarely will you see a player who looks as calm and confident on the big stage in their first year.

All the makings of the greatest power forward were there for all to see right from the beginning.

Much like Magic, Larry Bird played a major role for a team which went all the way to the Finals.

If you value winning, this has to weigh heavily into the ranking process.

One of things which stood when watching a young Larry Bird was that he was hitting at a high rate from three during a time it was considered semi-bold to even attempt a shot from outside the arc.

Larry was a man before his time.

When you think about Shaq, you tend to think about big, hefty, “I’ll work myself into shape during the regular season” Shaq.

But as a rookie, he was a mean, lean basketball machine.

And yet he was still so imposing that very few could match it with him physically.

Backboards be warned, young Shaq was an absolute beast.

Not bad for a dude who was playing soccer exclusively until he was 17-years-old.

Better still, the Rockets improved from 29 wins to 48 wins the year he arrived in Houston.

The media has already run out of superlatives to describe Ben Simmons.

We’ve drained the well and it’s only year one.

While journalist types are often criticised for beating up stories within an inch of their lives, the fact we’ve exhausted the ways in which we can describe this man is more a reflection of Simmons’ breathtaking natural ability than it is of the media.

The Sixers have hit their stride in stunning fashion lately, taking off faster than a particularly skittish cat threatened with a high-power garden hose.

Philly enter the playoffs on a 16-game winning streak and Simmons is the driving force behind it all.

Incredibly, he’s taken his team these heights with co-star Joel Embiid sidelined and resigned to trying on protective masks.

LeBron came into the league three years before he was old enough to purchase an adult beverage, and yet looked scarily ready for the NBA.

The knock on LeBron was his three-point shooting, and as weird as it is to think about King James having a major weakness, his field goal percentage was nothing amazing either.

But he still deserves a lot credit for dragging the Cavs from 17 wins to 35 in his first year, despite still being surrounded by very underwhelming teammates.

And while it wasn’t his fault that he was playing for a bad team, I can’t put him ahead of guys who had better stats and team success.

Let’s get the negatives out of the way.

Allen Iverson averaged more turnovers than any rookie on this list, while also having the worst field goal percentage (just).

Those two factors saw him drop down the list.

This may seem harsh for a dude who averaged 23 and seven in his rookie season, but when you run an eye over the near perfection he’s up against, we have to nit-pick and seek out flaws wherever we can.

Of course, Iverson was an absolutely phenomenal rookie.

What made him truly special his tendency to play with an edge that made him more culturally significant than almost anyone on this list.

While there isn’t direct correlation between a player’s cultural significance and their greatness, Iverson had both in his DNA.

There you have it, the 10 greatest rookie seasons of all-time.

As crazy as it seems for players like LeBron James and Allen Iverson to be towards the bottom of any list, their relatively low rankings speak volumes of the incredible rookie seasons all these guys had.

There are endless factors to weigh up when ranking them and it’s an almost impossible task.

No matter who you put towards the bottom, there’s always going to be a strong argument to put them higher.

But as far as I’m concerned, Magic is the king of the rooks, MJ wasn’t far behind, and Ben Simmons well and truly earned his place in the top 10.