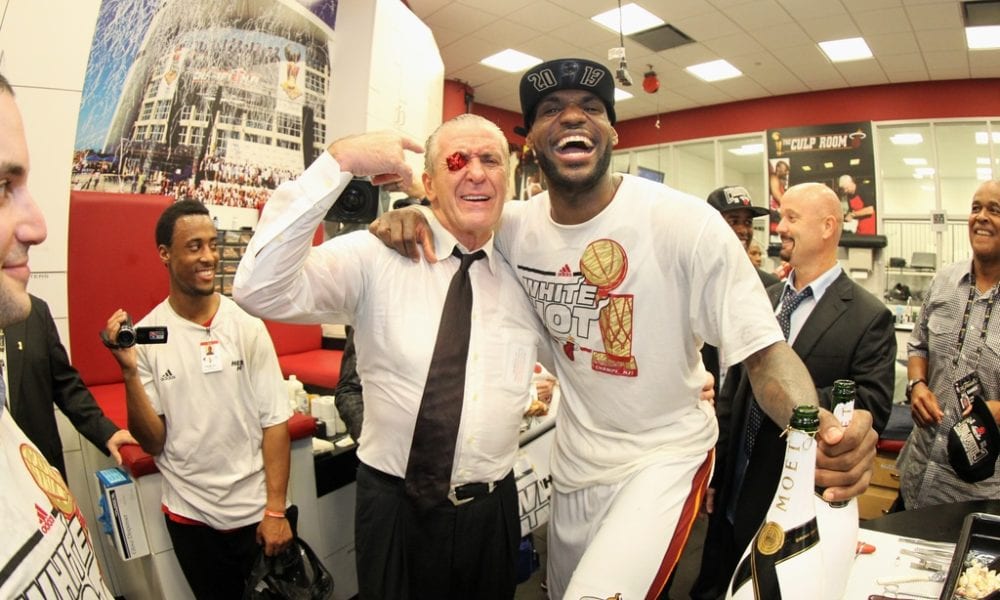 A slew of juicy details has emerged from the wild ride that was LeBron James’ four-year tenure in Miami.

Little had been said about what went on behind the scenes at this decade’s most infamous ball club, but that changed today when a bunch of tidbits emerged from author Ian Thomsen’s forthcoming book, The Soul of Basketball: The Epic Showdown between LeBron, Kobe, Doc and Dirk that Saved the NBA.

What makes Thomsen’s book particularly interesting is that he was able to bail up Heat president Pat Riley – who had previously avoided discussing the LeBron era – for a candid and wide-ranging interview.

Here are the highlights from what we know so far, via ESPN veteran Jackie MacMullan.

When LeBron’s first season in Miami got off to a rocky (9-8) start, so did his relationship with Erik Spoelstra.

He clearly wasn’t sold on an unexperienced coach leading his star-studded veteran squad, especially when the stakes were so high.

There was undoubtedly an early rift, perfectly symbolised by James bumping Spoelstra on his way to the bench early in their first season together.

Demanding to know what was going on, Pat Riley pulled James into a meeting the following day, along with Dwyane Wade and Chris Bosh.

According to the legendary former coach, it was then that LeBron strongly hinted Riley should take the coaching reins from the incumbent Erik Spoelstra.

“…I remember LeBron looking at me, and he said, ‘Don’t you ever get the itch?’” Riley told Thomsen, via MacMullan. “I said, ‘The itch for what?’ He said, ‘The itch to coach again?’ I said, ‘No, I don’t have the itch.’ He didn’t ask any more questions, and I didn’t offer any more answers. But I know what it meant, and I always go back and wonder about what he was thinking at that time. He walked out scratching his leg like it was itching.”

Riley told Thomsen he tried to prepare LeBron and his entourage for ‘The Decision’ sparking a wild backlash.

But according to the Miami godfather, they wouldn’t listen.

“…Both of them, Maverick [Carter] and LeBron, looked at me,” he said. “Like, ‘Fear? Afraid of what?’ They almost mocked me. This was a big decision. I was trying to tell them, ‘Shit [is] going to hit the fan, man.’ ‘Afraid? Us?’ They had so much confidence in what they were doing, and they were so smart in a lot of ways.”

LeBron making his announcement on an hour-long TV special only added fuel to the fire, and Riley later told of a shaken LeBron who “almost had tears in his eyes” when he arrived in Miami a few days later.

Riley said he was “absolutely livid” when LeBron decided to leave Miami for Cleveland in 2014.

“I had two to three days of tremendous anger,” he told Thomsen via MacMullan. “I was absolutely livid, which I expressed to myself and my closest friends.”

It appeared the Heat president had far too much pride to stay in touch with the superstar who’d spurned him.

But he eventually reached out to James via text moments after LeBron’s Cavs took to the floor against the Warriors for game seven of the 2016 finals.

The text read, ‘Win this and be free’.

But he did have some choice words to share after the game, which many assumed were referring to Riley.

“When I decided to leave Miami — I’m not going to name any names, I can’t do that — but there were some people that I trusted and built relationships with in those four years [who] told me I was making the biggest mistake of my career. And that [expletive] hurt me. And I know it was an emotional time that they told me that because I was leaving. They just told me it was the biggest mistake I was making in my career. And that right there was my motivation.”

As for Riley’s thoughts?

“It wasn’t me,” he told Thomsen. “I never said anything to him.”

Riley said that much of his anger surrounding LeBron’s departure stemmed from his belief that James was throwing away a golden opportunity to build a genuine dynasty.

“My beautiful plan all of a sudden came crashing down. That team in 10 years could have won five or six championships. But I get it. I get the whole chronicle of [LeBron’s] life.”

Imagine that, LeBron doing the impossible and living up to his infamous “not one, not two, not three…” tagline from Miami’s overzealous welcome party in 2010.

Despite being so pissed off with LeBron’s departure that he’d later suggest Shaq – not James – was the Heat’s greatest ever acquisition, Riley later came to realise that LBJ made the right decision to return home.

“While there may have been some carnage always left behind when he made these kinds of moves, in Cleveland and also in Miami, he did the right thing,” Riley said. “I just finally came to accept the realization that he and his family said, ‘You’ll never, ever be accepted back in your hometown if you don’t go back to try to win a title. Otherwise someday you’ll go back there and have the scarlet letter on your back. You’ll be the greatest player in the history of mankind, but back there, nobody’s really going to accept you.’”

Despite all his and LeBron’s differences, Riley’s tremendous sense of pride eventually gave way to the understanding and intelligent man that was always lying beneath the surface.