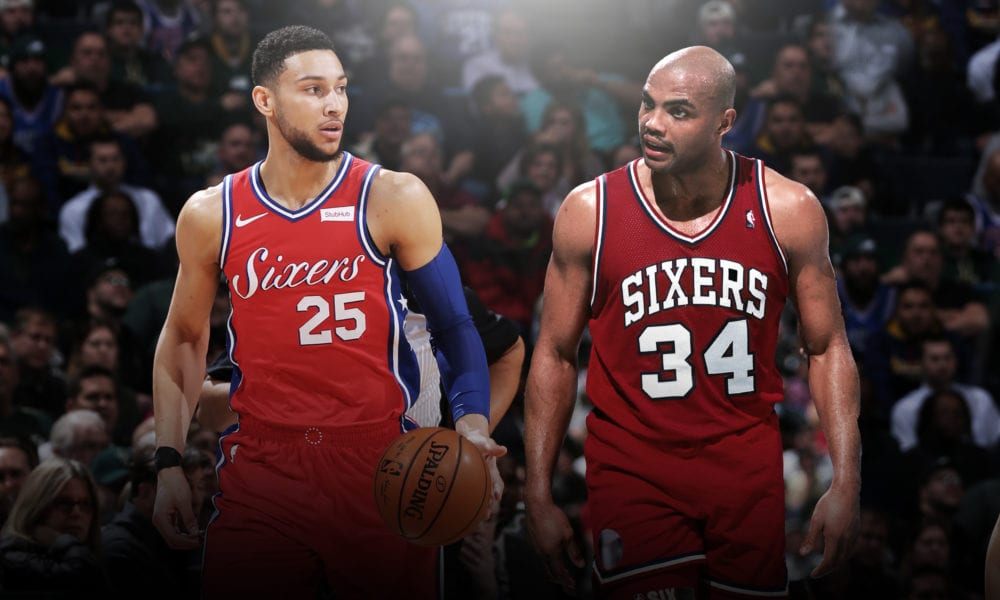 Think about this: the last 76ers team to win at least 13 straight games had a roster featuring Charles Barkley, Moses Malone and Julius Erving.

Not to mention all-NBA first teamer Maurice Cheeks (about to be inducted into the hall of fame) and the Boston Strangler Andrew Toney, who averaged 18 points and five assists that season while earning 2nd team all-defensive team honours.

That squad got to the eastern conference finals. And one member of that group has already predicted the 76ers will go two steps better and win it all.

Charles Barkley has high hopes for the 76ers this year. pic.twitter.com/p3ZyeiTpNV

And that was before the Sixers’ incredible 132-130 win over LeBron James and the reigning eastern conference champion Cleveland Cavaliers on Friday.

That winning streak has now extended to 14 against lowly Dallas and if Philadelphia can win out (Atlanta and Milwaukee remaining) they will secure a three seed, avoiding both Cleveland and Toronto until the conference finals – if they get there.

Coach Brett Brown will understandably try to keep a lid on expectations, but has recognised the significance of the victory against the Cavs.

“I thought to withstand that is a really timely game to have been played as we enter the playoffs”, Brown said.

The ceiling for this team just keeps being pushed higher with each impressive victory.

Brown went a step further adding, “I saw it immediately after the game, there’s just a very spirited group of some old, some young players that are sharing in each others’ success.”

One of those ‘old’ members of the group is JJ Redick, who is playing the best ball of his career.

He scored a team-high 28 points against the Cavs and is on track to finish with the highest scoring averages of his career.

More importantly, he is a cool head constantly instructing his young, brash teammates and that was on full display against LeBron on Friday.

Redick saved the day, hitting a crucial three to put Phillie up eight in the final couple of minutes, saving Ben Simmons from taking an outside jump shot when it appeared the shot clock would expire on them.

After the game Redick observed, “How we respond to those runs I think in the playoffs get amplified even more than just a normal regular-season game. How we responded to their run and were able to close out that game was really impressive.”

Even more impressive is the last five of the Sixers 13 straight victories have been with Joel Embiid in the sidelines.

And Coach Brown couldn’t be more excited by the prospect of the big fella rejoining the group, especially seeing as how good a shape he’s in right now.

“I think Joel looks great, like he’s as thin as I’ve ever seen him. He is what we talk about thin is in all the time his body looks exceptional and his spirit is there to match that. So to see Joel like bring the team and we got a bell ringer in Ben Simmons and see those two young guys and the veterans, it’s just a very tight room.”

Simmons himself is keeping things very low key, in the wake of his devastating performance out-duelling Lebron.

“I think it was big. Beating a team like that without a star, [Joel Embiid]. I think everyone is coming together as a team.”

Embiid doesn’t shy away from his newfound star status, and in many ways takes the pressure off his teammates by happily taking on all-comers by himself.

His outspokenness means Simmons and Co don’t need to be, they can focus on bringing down opposing stars, like they did against the brightest of them all on Friday evening.

And how did LeBron respond to Simmons’ virtuoso performance?

“He was awful… he was great of course.”

No doubt he won’t get away with being so cute with his answers if the Sixers’ ship continues on its course through April and into the business end of the post season.