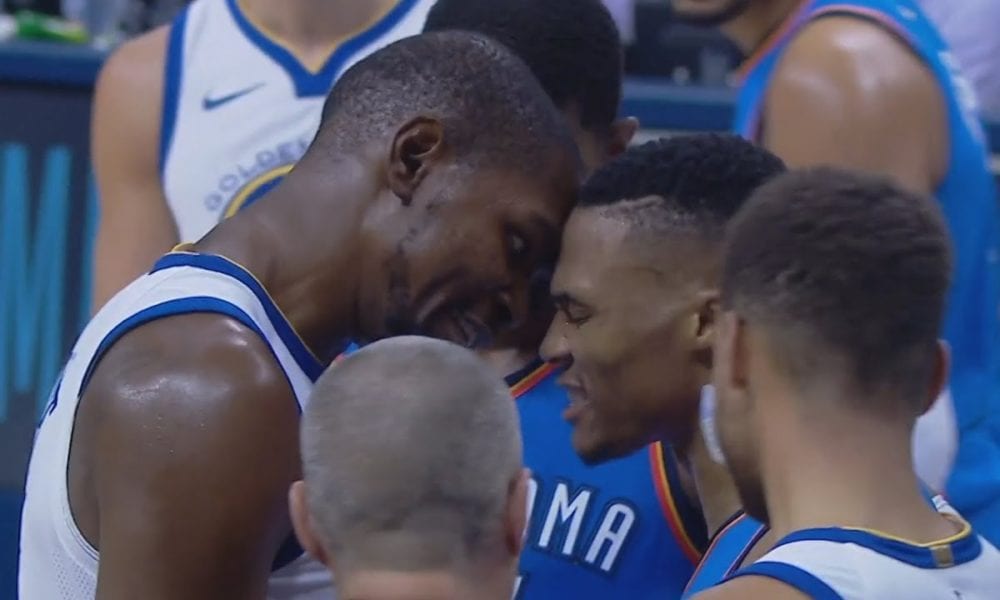 The off-court fire between Kevin Durant and Russell Westbrook has died down from the volcanic levels it sustained last season but there’s still plenty of tension whenever the two face off.

They both say there’s no longer a rift off-court but it’s clear they are desperate to best each other on it, and we saw plenty of evidence of that during Golden State’s 111-107 win over Oklahoma City, their third win in a row at Chesapeake Energy Arena.

Their individual stat lines were fairly good indicators of that determination.

The third quarter gave us what we all wanted with the pair guarding each other across multiple possessions, with Westbrook winning that battle.

It was Durant who won the war however. But it was close.

Westbrook’s final rebound and put-back was incredible and brought the margin back to four with 1.15 remaining and then he stole a Durant pass to set up an easy layup and a two point margin with 20 seconds remaining.

But steady free throw shooting from the Warriors sealed the win, giving KD a 5-2 advantage when the pair have squared off against each other.

No one will ever forget the first time he went back to OKC, Westbrook giving the fans what they wanted with 47 points, 11 rebounds, 8 assists and ONE GREAT LINE, “I’m Coming!”.

This game also featured a whole lot of cupcakes. Cupcakes being eaten, cupcakes on t-shirts and some great cupcake signs – the ultimate insult a player might receive from the Thunder locker room from the days Durant played there, insinuating the player is soft.

We may be getting some more clashes in the near future, with a possible 2 vs 7 matchup looming in the first round of the playoffs.

NB: Durant was inactive for the fourth and final clash between the two teams in the 2016-17 season.