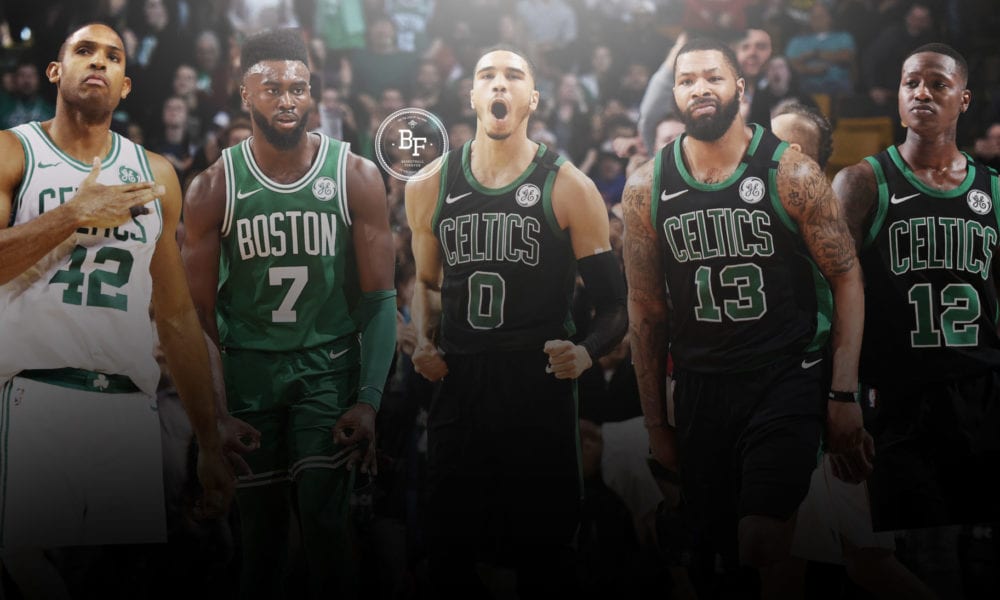 The Boston Celtics have the highest ceiling of any team in the east. And it’s really not close.

They have quietly put together a four-game winning streak, including a stunning victory over Oklahoma City as well as an improbable victory over the Portland Trail Blazers, upsetting the league’s hottest team on their home floor.

Terry Rozier has emerged as a fearless and deadly accurate Kyrie Irving stand-in, Jayson Tatum is returning to his impressive early-season form and Marcus Morris suddenly looks like a reliable closer.

When it comes to starters averaging 19 ppg, 6 rpg, 5 apg, Terry Rozier is an NBA BARGAIN!

But there has been no chorus clamouring to join the Boston bandwagon.

Even Celtics’ super fan Bill Simmons is pessimistic, recently saying, “I am really concerned about the Celtics, because of Marcus [Smart] – not having him in round one is absolutely petrifying to me… I think anyone can beat the Celtics in round one.”

He then compared missing Smart to having a car without a sunroof, but who says you need this proverbial sunroof to win the east?

Yes, the Celtics are significantly hampered by injury. But the eastern conference right now is as open as it’s been since 2010. Cleveland’s second best player from last season is a Celtic and LeBron James is surrounded by his worst supporting cast since 2010 – and maybe longer. Have we decided who their third best player is yet? Could it really be Larry Nance Jr?

The Toronto Raptors are the bookmakers’ favourite to win the east but the keys to their success this season – a revamped offensive system and clutch bench mob – could wilt under the playoff spotlight. There’s been evidence of the DeMar DeRozan isolation play making a big comeback recently and as much as Dwayne Casey says he won’t tighten his rotations in the playoffs he would be defying NBA history if he didn’t.

The Raptors’ tortured history in the playoffs would also support this possibility.

You need a Big Three to win in the NBA right?

The Cavaliers have the best player in the east and the Raptors have the best bench, but in recent years, conference championships and titles have been won by collections of big threes. And big fours, really, in the case of the 2017 title.

Who has the best big three/big four amongst these three teams? The Boston Celtics.

Kyrie Irving, Al Horford and Jayson Tatum figure as the top three stars for Boston (more on Irving’s return later). But even without Irving you could make a case for some pretty impressive big fours, substituting in a collection of Jaylen Brown, Morris and Rozier.

And that list of players does not include Greg Monroe, who had his way with the Raptors in the playoffs last year and the championship pedigree and reliable force of Aussie Aron Baynes.

That makes a seven (healthy) player rotation you would be confident with against the two teams the Celtics will likely face in the first round – Miami and Milwaukee. And ten minutes of Shane Larkin off the bench shouldn’t crumble the castle, especially with coach Brad Stevens directing the ship.

It’s also worth noting Boston’s defense improved dramatically with Kyrie Irving off the floor this season; opponents’ offensive rating was five points better off when he was ON the floor.

But let’s not kid ourselves. For the Celtics to get to the eastern conference finals – and win it – they need Kyrie Irving.

With him back on the floor we can start entertaining the Celtics getting close to that ceiling mentioned above.

So when will Kyrie Irving return and will he be near his best?

From everything we know from Irving’s recent knee surgery (the minimally invasive procedure was to remove a tension wire in his left knee) it seems likely he will return fairly early in the playoffs.

The 3-6 week timeline would see him be back as early as the first game of the post-season and the latter extreme would be May 6th. Last year that date would’ve equated to game three in the second round.

Irving’s level of play when he returns is harder to calculate. He was playing some of his best basketball in his 11 full games prior to the surgery, averaging 24 points and 6 assists and shooting 52% from the field.

Given he was playing this well while managing the knee pain, and the fact that the surgery was not aimed at repairing an actual injury, it’s not a giant leap to suggest he could approach that form on return.

As for concerns around Smart, his expected return date is very similar to Irving.

If they make it, who would Boston likely need to beat in the second round?

As everything currently stands, Cleveland projects to be their second round opponent. But given the Cavs are only 1 and 1.5 games clear of the 76ers and Pacers respectively in the number three seed, there is every chance they fall into the 4 vs 5 match-up.

In fact it’s the probable outcome given Philadelphia are currently riding a seven game win streak and play only two playoff-bound opponents in their final nine games. Cleveland’s path is a nightmare.

This would mean Boston could avoid both Toronto and Cleveland until the eastern conference finals – and only have to beat one to get to the finals.

Without mapping out every possible cross-match it’s fair to say there’s a reasonable path for the Celtics to make it to a second straight eastern conference finals.

If everything else goes to form, Boston would then battle the untested Toronto or the weakest Lebron-led Cleveland team in nearly a decade for a place in the NBA finals.

Will the Celtics´ bandwagon start to get crowded anytime soon?

The next four games will see Boston take on Toronto twice plus a desperate Utah and Milwaukee team. If they win all four, the cries to get behind the men in green will come in loud and clear.

But even if they don’t, there is every chance they are the last team standing when the dust settles on this year’s eastern conference playoff free-for-all.

Related Article:  Al Horford Cleared To Play In Game 2 Against The Miami Heat
-->