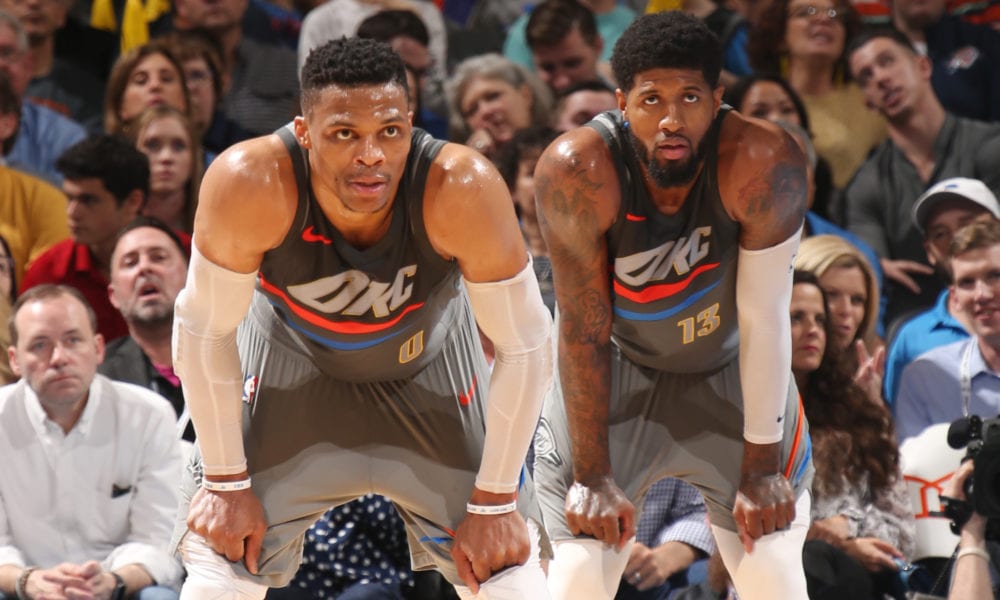 They are the sleeper pick for many NBA experts going into the playoffs.

They have had three 6+ game winning streaks Since December 18th.

They also find ways to lose in the most unfathomable of circumstances.

Oklahoma City were up six with 24.7 seconds left against the Celtics in Boston, and had the chance to take a four point lead at the free throw line with 7.7 seconds on the clock. Their opponent was also without their best player in Kyrie Irving, their best defender in Marcus Smart and a valuable wing in Jaylen Brown.

But they found a way to lose. And it felt all too familiar.

This was not a game where you could blame Russell Westbrook for trying to do too much. He took what the defence gave him and got himself to the rim throughout the game on his way to 28 points, eight rebounds and seven assists.

It also wasn´t a game where Paul George struggled with his shot, shooting 5-8 from three including some super clutch buckets down the stretch.

Carmelo Anthony played his third option role to perfection – almost – taking advantages of mismatches in the post. He had 13 points, five rebounds and three assists – the final one being an exceptional inside-out pass to Corey Brewer for a corner three.

So how did the Thunder lose?

The Celtics played Al Horford and Greg Monroe together in the final minutes, creating a mismatch that the Thunder could not defend. Two fantastic screens from Horford gifted Terry Rozier an open three and Jayson Tatum an easy lane to the rack before Rozier pulled up for a three in Westbrook´s face to reduce the gap to two points.

Two bricks at the free throw line from Carmelo Anthony then gave Boston a chance and Marcus Morris stepped up, hitting a three to complete the remarkable turnaround.

Unfortunately for Thunder fans, they’ve seen this movie before. Excruciating defeat follows a long line in a list of sequels that includes Mile High Meltdown, Freaky Friday and The Bank Job.

They lost on a three point buzzer beater against Denver in February, when Gary Harris was left wide open on an inbounds play with just 1.4 seconds left.

Likewise, Giannis Antetokounmpo got all the way to the bucket with a few seconds remaining to hand them defeat on a Friday night in late December.

Perhaps the most memorable was Andrew Wiggins taking it the length of the court with less than five second left and banking in a three at the buzzer – with a little help from a hotly-disputed screen from Karl Anthony Towns.

Some may argue these somewhat freakish losses are at odds with an otherwise impressive season, but odd things tend to happen when you allow a team to hang around, especially when the game slows down in the playoffs.

This loss also means the fourth-placed Thunder are now just two games ahead of the eighth-placed Timberwolves, and it may well cost them home-court advantage in the playoffs.