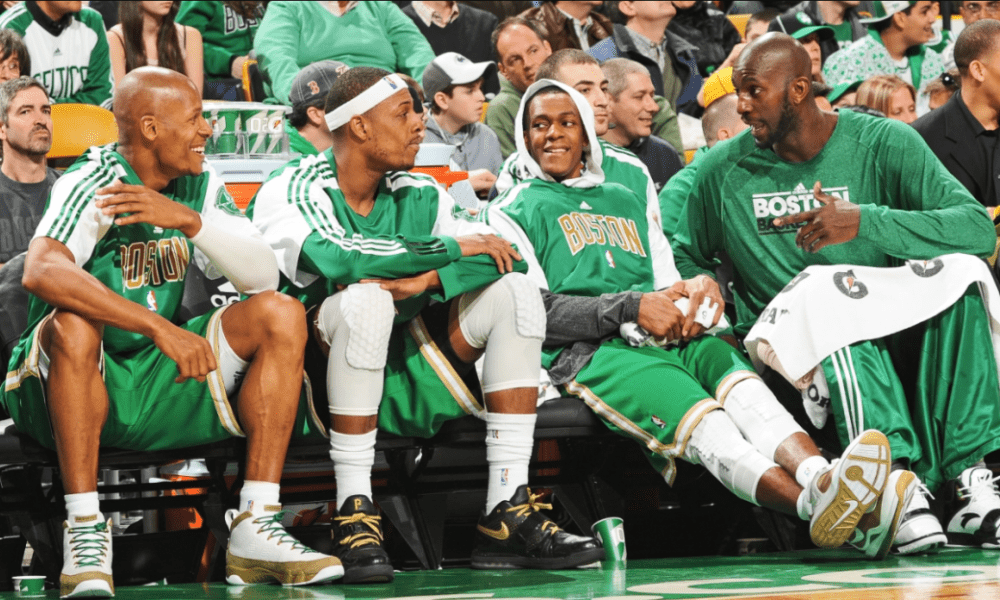 Has anyone ever pissed you off so much you could’ve written an entire book about their infuriating tendencies and general obnoxiousness?

Of course, not all of his soon-to-be-released title, From the Outside: My Journey Through Life and the Game I Love, is dedicated to the Celtics players most likely to grind his gears.

But he certainly had a lot to say about Kevin Garnett and Rajon Rondo.

Allen had numerous tales highlighting KG’s overbearing intensity, which even spilled over to dinner shortly after the two first landed in Boston.

According to Sporting News, Allen wrote that when he asked the waitress for the cheque, Garnett said, “No. I tip way better than him, so you better give me the check.”

“There was no point in arguing with the guy,” Allen wrote.

“What struck me was that he felt the need to be seen as being superior to me, even in something as petty as this.”

Allen also told a story about KG demanding that Ray stop dribbling in front of his own locker during their first preseason together.

Allen, who had abided by that dribbling ritual his entire career, swiftly fired back.

But as he later wrote, “Gee, can two grown men be any more juvenile?”

As the tension continued to boil like Stone Cold and The Rock standing face-to-face in the ring circa 1999, it came as no surprise that Garnett shut Allen out of his life after Ray defected to Miami in the summer of 2012.

As Allen wrote, “KG would quarrel with his grandmother if she signed with another team.”

Of course, it was precisely that loyalty to his squad that made Garnett a famously fantastic teammate, and that fact isn’t lost on Allen today.

“If I had to choose only one (former teammate) to play with, it would be Kevin Garnett,” he wrote. “No one else comes close.”

Then there was Rajon Rondo.

Allen stated their initial relationship couldn’t have been better, and that they had a big brother-little brother type bond.

But the shit well and truly hit the fan in the years following their 2008 championship triumph.

Allen was largely at a loss to explain why, unable to pin the souring of their relationship to any specific moment or problem.

It certainly didn’t help when rumours were swirling about Boston looking to trade Allen and Rondo to Phoenix during the 2010-11 season.

According to Allen, it was then Rondo told his disbelieving teammates, “I carried all of you to the championship in 2008.”

Rondo claimed everyone on the team had a problem with him, saying to Allen “You did, too. You told me I was the reason we were going to be traded.”

Allen said he simply viewed Rondo as a player who expected to be treated as a leader before he’d truly earnt it.

Apparently having ‘starting point guard on a championship team’ on his resume wasn’t enough.

As we approach the 10-year anniversary of that team’s title, it remains unclear whether Allen will remain forever distant from his old teammates (see Chris Webber and the Fab Five) or eventually make amends against all odds (see Magic Johnson and Isaiah Thomas).

Allen’s book will be released later this month, for those of you keen for all the juicy details.