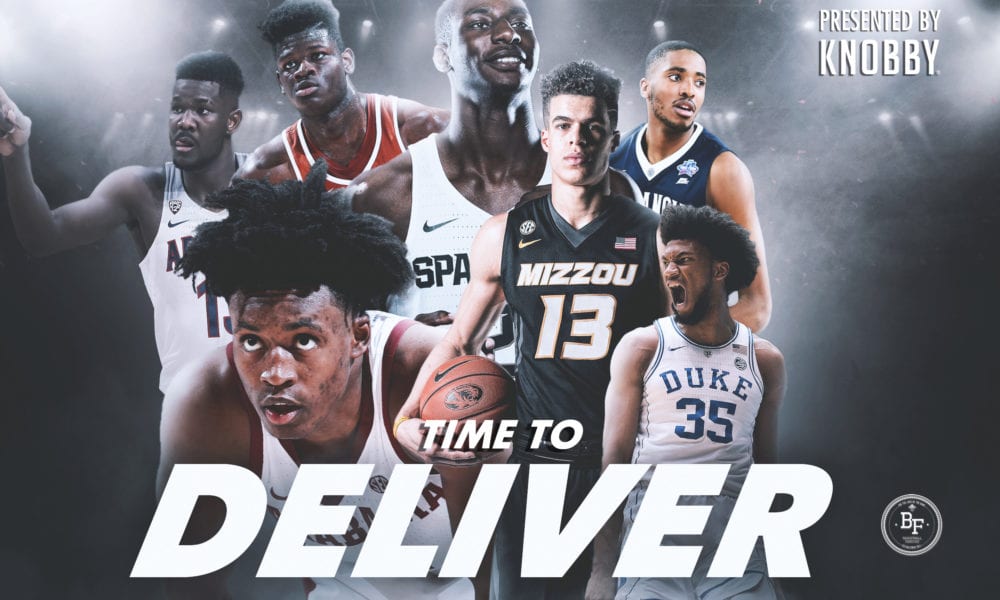 Like Jeff Van Gundy’s voice on any given NBA broadcast, the March Madness buzz is reaching fever pitch.

That should come as no surprise, given the full schedule is now locked in with play set to start on Tuesday.

But before busily filling out your undoubtedly doomed bracket and cancelling all and any engagements between March 13 and April 2, be sure to check out Basketball Forever’s guide to the biggest names of the tournament.

Widely projected to be the number one draft pick in June, DeAndre Ayton is by far the most physically imposing freak of nature in college basketball.

The Arizona behemoth stands at 7’1, weighs in at 260 pounds, and don’t even get Jay Bilas started on his 7’5 wingspan.

Ayton’s combination of size, skill, athleticism and general savageness is unlike anything we’ve seen in the NCAA all year.

Look beyond the big man’s towering frame and you’ll also notice he’s gaining confidence in his outside shot, is extremely light on his feet and traditionally cleans the glass until he can see his reflection in it.

Ayton’s numbers have reflected his extensive skillset, the big man putting up 19.9 points and 11.3 rebounds on 61.2 percent from the field this season.

Most recently, he dropped 32 points and 14 rebounds in an overtime win over UCLA in the Pac-12 Tournament on Friday, before leading the Wildcats to the conference title with 32 points and 18 rebounds against USC on Saturday.

No one has captured the imagination of hoops fans this season like Trae Young.

His eye-popping performances defined this season, while elevating him to God-like status among even the most casual college hoops fans.

The craziest part of all this was that none of us saw it coming.

Young was always projected to be good.

But no one predicted he would dominate the college basketball news cycle, have NBA stars publically raving about him and pull every savage move on his opponents short of dousing their home arenas in fuel and burning them to the ground.

But they say we only build players up to tear them down, and that’s precisely what happened to Young once his purple patch was over.

And that’s why he has more to prove than anyone during March Madness.

The tourney will be his chance to show us that early season ‘rip your heart out and dance on your grave’ Trae Young is the real Trae Young.

Michael Porter Jr is preparing himself for a baptism of fire.

Before last week, the 6’10 star recruit had only played two minutes for Missouri all season, having left the floor shortly after tip-off on opening night due to what turned out to be herniated discs.

It was a gutting moment for the 2017 McDonald’s All-American MVP.

The season promised so much, but that promise had turned into despair in the blink of an eye.

But after returning to the floor against Georgia in the SEC Tournament on Thursday night with 12 points and 8 rebounds on 5-17 shooting – an admittedly rusty performance – he’s back and ready to make an impact on the grandest stage of all.

With a near seven-foot frame despite playing on the wing, Porter Jr’s elite skillset has long drawn comparisons to Kevin Durant.

While he’s barely played competitive basketball all year, the tourney presents him with a golden opportunity to prove those comparisons were justified.

But he’ll need to shake off that full season of rust in a hurry, because Missouri is no guarantee to progress past the first round, having drawn Florida State.

One name you’ll certainly be hearing a lot in March – and again leading up to the draft in June – is Marvin Bagley.

The Duke gamer is a high-usage big man who prefers to carry out the majority of his offensive destruction in the paint.

Bagley’s outside shot is still a work–in-progress and there are still plenty of question marks hovering over how his game will translate into the pace-and-space world of the NBA.

But the fact remains, he’s unguardable at the college level and looks primed to lead Duke deep into the tourney.

It takes a brave man to drive the lane against Texas giant Mohamed Bamba.

Bamba just about scrapes the arena ceiling with his fingernails when he elevates, making it impossible to gain access to the rim.

Some never try, while others have been known to enter the paint and never return.

Defence is where Bamba really comes alive and he will absolutely terrorise teams throughout March.

The big man’s offence is much more suspect, making him one of the biggest boom-or-bust prospects in the draft.

He’ll also be put to the test right away in the tournament, with Texas drawing seventh-seeded Nevada in the first round.

Jaren Jackson Jr’s stock has risen faster than Facebook’s in the mid to late 2000s, and if his rapid rise continues into mid to late March, he could be in for one hell of a tournament.

Let’s break this down by making like David Fizdale and focusing on the data.

That means Jackson is snuffing out the weak stuff and swatting it into the back row every seven minutes on average, a truly staggering feat.

The star Spartan is your classic modern-day big man, complete with the ability to hit threes and defend at a high level both in the paint and on the perimeter.

A string of dominant performances throughout March would erase any remaining doubt that Jackson is the best center in the college game.

I really don’t need to tell you to keep an eye on Alabama point guard and human ball of energy Collin Sexton.

If you watch any of the tournament at all, you won’t be able to take your eyes off him.

With the tendency to do things like ram the ball down your throat (and the rim) before shimmying all the way back on defence, this is a dude who demands your attention.

The projected lottery pick is not only the unequivocal star of the Crimson Tide, but is arguably the best point guard in college basketball right now (cue all the hate mail from Trae Young’s loyal, cult-like followers).

Following his coast-to-coast game-winning buzzer beater against Texas A&M in the SEC Tournament on Thursday, Sexton is the reason his team is featuring at March Madness at all.

With Virginia Tech first up, his greatest challenge yet will be to keep them there.